So that old reptile is still alive. 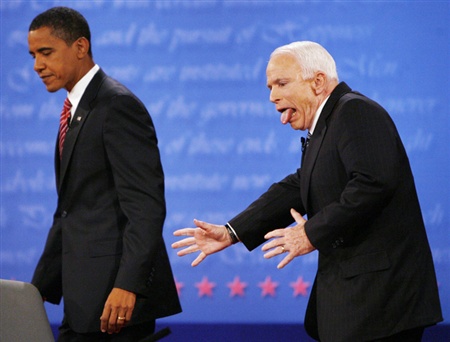 They may look different, but they are both elite puppets of the worst kind.

‘The full weight of American air power’ to ‘protect’ civilians???

The planned war in the middle east has only just begun and it will soon be called WW III, if we don’t stop the war mongers NOW.

Change! = Destroying what is left from the Republic and preparing for endless war:

WASHINGTON (AP) — Republican Sen. John McCain says the fighting in Libya might be over by now if the U.S. had used greater force against Moammar Gadhafi.

McCain is one of the strongest proponents in Congress of military intervention in Libya. He told “Fox News Sunday” that NATO is stepping up attacks but that he’s still not satisfied.

In McCain’s words, “This thing could have been over a long time ago if we had brought the full weight of American air power to bear on him.”

– The No.1 Trend Forecaster Gerald Celente’s Dire Warning For The World:

McCain on ‘Bomb Iran’ Joke: “Get a Life”