“It’s not just U.S. stocks and real estate that are going to lose value, but U.S. bonds. This is the last bubble yet to burst. I think we’re going to see a collapse of the bond market sometime during Obama’s first term, and interest rates are going to spiral out of control, and the dollar is going to just be destroyed.”

Investor fear drives US Treasury yields to near zero 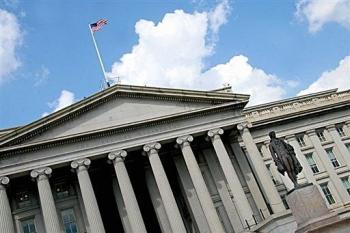 The US Treasury Department

WASHINGTON (AFP) – The panic in global financial markets has sparked an unprecedented rush into safe US Treasury securities, driving yields on short-term government notes down to almost zero.

Due to stampeding demand for safe short-term investments, the US Treasury’s four-week and three-month bills on Friday yielded an effective rate of 0.01 percent — down sharply from 1.515 percent and 1.785 percent, respectively, in early September.

The low yields reflect a surge in demand for these instruments, seen as the safest in the world during times of turmoil.

Read moreThe Biggest Bubble of All