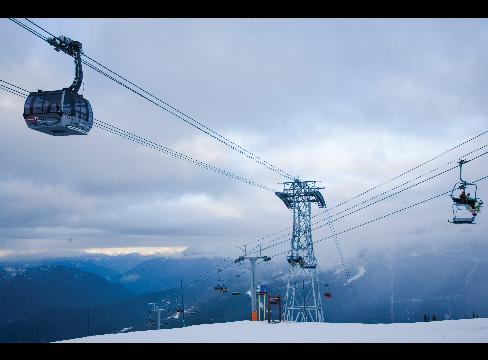 Jan. 30 (Bloomberg) — One of the things Wesley Edens did soon after his company bought Canadian ski-resort conglomerate Intrawest Corp. in October 2006 was to finance construction of a $43 million gondola at Whistler, British Columbia.

The new lift, completed in December 2008, is the longest unsupported span for any gondola, stretching 2.73 miles (4.4 kilometers). It’s also the highest, dangling 1,427 feet (435 meters) over Fitzsimmons Creek between Whistler mountain and its sister peak, Blackcomb. Visitors to the 2010 Winter Olympics, for which Intrawest’s Whistler Blackcomb resort is a venue, are likely to ride it just for thrills: Two of the 28 cars have glass bottoms.

Two years after commissioning the ski lift, Edens, 47, finds himself staring into an abyss of a different sort. He’s the chief executive officer of money manager Fortress Investment Group LLC. Edens and his partners became instant billionaires when the company, which manages $34.3 billion in private equity and hedge fund holdings, went public in 2007. The Montana-born Edens, who ski-raced in high school, could have paid for the gondola himself.

In the past four months the shares of Fortress have lost most of their value, falling 96 percent to $1.34 from $31 on Feb. 9, 2007, their first trading day. “There’s been a lot of hardship in the world since then,” says Edens in a rare interview.

The stock prices of a half dozen other publicly traded companies controlled by Fortress have also plunged.

Analysts are bearish on Fortress, even at a rock-bottom price.

“The more I’ve learned about Fortress, the less comfortable I’ve become,” says Jackson Turner, who follows the company at New York-based Argus Research Co. “There’s just this drip, drip, drip of bad news.” He recommends selling the shares. Only one of nine Fortress analysts tracked by Bloomberg rates them a buy.