A tide of lurid speculation, questionable accusations and possible blackmail attempts is buffeting the Vatican following Pope Francis’s claim that he is preparing to tackle a gay lobby secretly at work behind the Holy See’s walls.

The new pope’s private comments to a group of visiting South American churchmen, which caused a sensation when they appeared on a religious website last week, prompted blushes in the Vatican and unleashed feverish gossip in Rome regarding the contents of a report on Vatican infighting prepared last year for Francis’s predecessor, Joseph Ratzinger.

On his retirement in February, Ratzinger handed his Argentine successor the dossier, which reportedly describes a lobby of gay, senior churchmen inside the Vatican, running a network of patronage while fighting off blackmailers.

Gay rights supporters may have found a friend in Pope Francis.

Cardinal Jorge Bergoglio — now Pope Francis — came out in support of civil unions for gay couples in 2010, Newser reports. It was during a time of spiritual chaos in Argentina, as the church there was battling attempts to legalize gay marriage. And Cardinal Bergoglio came forward with what he described as the “lesser of two evils” solution, Newser reports.

“He wagered on a position of greater dialogue with society,” his authorized biographer says, in the Newser report. He publicly criticized the gay marriage bill winding through Argentina’s legislature, but quietly supported same-sex union rights.“He listened to my views with a great deal of respect,” one gay activist leader said, the biographer recounted. “He told me that homosexuals need to have recognized rights and that he supported civil unions, but not same-sex marriage.”

His same-sex union proposal was ultimately shot down during a heated gathering of bishops, Newser says. But some religion watchers say those 2010 discussions may indicate a new and more modern direction of the Catholic Church.

– JESUIT Pope Francis Has Blood On His Hands

Rome — The spiritual leader of 1.2 billion Roman Catholics, Pope Benedict XVI, surprised the world Monday by saying he will resign at the end of the month “because of advanced age.”

It’s the first time a pope has stepped down in nearly 600 years.

“Strength of mind and body are necessary, strength which in the last few months has deteriorated in me to the extent that I have had to recognize my incapacity to adequately fulfill the ministry entrusted to me,” said Benedict, 85, according to the Vatican.

The news startled and shocked the Catholic world and led to frenzied speculation about who would replace him.

And now the catholic church wants to get away with it:

For all these children all around the globe we cannot allow this to happen. 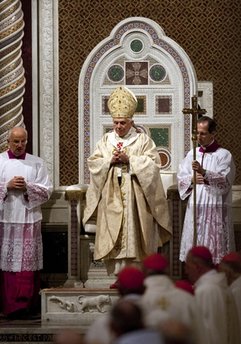 Pope Benedict XVI celebrates the feet-washing rite in the Basilica of St. John Lateran in Rome, Thursday April 1, 2010. The feet-washing ceremony symbolizes humility and commemorates Jesus’ last supper with his 12 apostles on the evening before his Good Friday crucifixion. (AP)

(AP) VATICAN CITY  – Pope Benedict XVI’s personal preacher on Friday likened accusations against the pope and the Catholic church in the sex abuse scandal to “collective violence” suffered by the Jews.

The Rev. Raniero Cantalamessa said in a Good Friday homily with the pope listening in St. Peter’s Basilica that a Jewish friend wrote to him to say the accusations remind him of the “more shameful aspects of anti-Semitism.”