Not one word about Fukushima.

Put down the California crab legs — they could be poisonous.

“Due to the detection of dangerous levels of domoic acid,” Dungeness and rock crabs caught in waters between the Oregon borders and the southern Santa Barbara County line pose a “significant risk to the public if consumed,” the California Department of Public Health said in a release.

Neon Tommy (L.A.-based news source, USC’s Annenberg School for Communication and Journalism), Apr. 16, 2014: Could Radiation Fear Sink The Fishing Industry? — Fisherman Mike McCorkle has been fishing for 60 years and contends that he may be facing his biggest challenge yet. In the past few months he says that Korean newspapers in the L.A area have been warning their readers to avoid eating locally-caught fish. The Korean press claims that locally-caught fish contain radiation. […] Woods Hole Institute of Oceanography [sic] […] confirmed that a plume of radiation from Fukushima will arrive on the American West coast in April […] Although the science refutes any danger from consumption of Pacific fish [See: Expert: Cancer increase for West Coast from Fukushima exposures; No safe dose of radiation] some still retain a fear of radiation. Santa Barbara’s Seagrass Restaurant no longer serves Pacific fish. […] One source of [the head chef’s] fear is because he subscribes to the independent news site ENE News, which compiles negative news on Fukushima and its effects on seafood. […]

A Canadian high school student named Bronwyn Delacruz never imagined that her school science project would make headlines all over the world.  But that is precisely what has happened.  Using a $600 Geiger counter purchased by her father, Delacruz measured seafood bought at local grocery stores for radioactive contamination.  What she discovered was absolutely stunning.  Much of the seafood, particularly the products that were made in China, tested very high for radiation.  So is this being caused by nuclear radiation from Fukushima?  Is the seafood that we are eating going to give us cancer and other diseases?  The American people deserve the truth, but as you will see below, the U.S. and Canadian governments are not even testing imported seafood for radiation.  To say that this is deeply troubling would be a massive understatement. 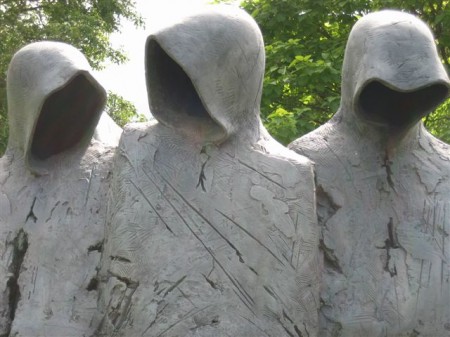 Do you believe in any “health conspiracy theories”?  Do you believe that there are “natural cures” for diseases that the medical establishment is not telling you about?  Do you believe that vaccines, cell phones or the fluoride in the water can have a harmful impact on the health of your family?  If you answered yes to any of those questions, you are not alone.  According to one recent survey, approximately half of all Americans believe in at least one “medical conspiracy theory”.  Thanks to the Internet, more people than ever are questioning the established dogma of the medical community.  As a result, more people are starting to make their own health decisions, and this has resulted in quite a backlash from the medical establishment.  They are spending a lot of time, effort and money to combat these “health conspiracy theories”, but as you will see below, quite a few of them have turned out to be real.

Read more10 Health Conspiracy Theories That Turned Out To Be Real

As Harvey Wasserman expounds ~ Fukushima’s missing melted cores and gushing radioactivity continues to fester in secret and speculation on the ultimate impact borders from relatively harmless to intensely apocalyptic. However, it is obvious to all that the impacts of these emissions on human and ecological health are unknown primarily because the nuclear industry has resolutely refused to study them:

As Wasserman explains ~ ” This “see no evil, pay no damages” mindset dates from the Bombing of Hiroshima to Fukushima to the disaster coming next … which could be happening as you read this “ so here are some major points to consider as you determine , as I do, that this is indeed Apocalypse Now (courtesy of Harvey Wasserman)

1. At Hiroshima and Nagasaki (1945), the U.S. military initially denied that there was any radioactive fallout, or that it could do any damage. Despite an absence of meaningful data, the victims (including a group of U.S. prisoners of war) and their supporters were officially “discredited” and scorned

2. During and after the Bomb Tests (1946-63), down winders in the South Pacific and American west, along with thousands of U.S. “atomic vets,” were told their radiation-induced health problems were imaginary … until they proved utterly irrefutable.

– Leaders on West Coast: Gov’t is “highly irresponsible… very negligent” for not testing in Pacific as Fukushima radiation arrives — Contamination of seafood is going to happen — “We don’t want to get cancer… We have a right to know if our fish is safe” — Gov’t: Testing ‘not required’ (ENENews, Feb 8, 2014):

Coast Reporter, Feb. 6, 2014: […] Radiation from the March 2011 nuclear accident arrived off the B.C. coast [in June of] last year, Robin Brown [at the Department of Fisheries and Oceans] said Tuesday. […] a report by five DFO scientists concluded that […] “the inventory of Fukushima radioactivity will almost entirely shift from the western to the eastern North Pacific during the next five years.” […] [It featured one model that] suggested ocean contamination would exceed levels of maximum fallout from nuclear tests and previous accidents such as Chernobyl, while the other model said levels would equal the amount of contamination that existed in 1990. […] the report cited “many reasons for study,” including human health and marine biota. Brown, one of the co-authors of the report, acknowledged that neither study factored in ongoing discharges from Fukushima after the March 2011 release.

Read moreLeaders on West Coast: Gov’t is ‘highly irresponsible … very negligent’ for not testing in Pacific as Fukushima radiation arrives – Contamination of seafood is going to happen – ‘We don’t want to get cancer … We have a right to know if our fish is safe’ – Gov’t: Testing ‘not required’

– Professor: “Fukushima spillage affects the life of the world ocean”; Must have very careful control of all Pacific seafood without exception — Gov’t Scientist: “It is a huge question” — Biologist: “The public wants to know… People think there’s a conspiracy” (ENENews, Feb 6, 2014):

Professor Alexey Yablokov, advisor at the Russian Academy of Sciences, Feb. 6, 2014: “Fukushima spillage affects the life of the world ocean. I see no other way out other than to establish a constant and very careful radiation control of all seafood caught in the Pacific Ocean without exception”.

Steven Manley, marine biologist at CSU Long Beach, Feb. 5, 2014: “The public wants to know […] Whenever you deal with radioactivity there’s a real sensitivity. People get scared. […] People think there’s a conspiracy […] We want to alleviate some of that.”

Read moreProfessor: ‘Fukushima Spillage Affects The Life Of The World Ocean’; Must Have Very Careful Control Of All Pacific Seafood Without Exception

– Marine Expert on MSNBC: Months of uncontrolled radioactive releases from Fukushima a problem for Pacific, radionuclides building up in food chain — Health threat to Americans not likely if leaks ended soon after 3/11 (VIDEO) (ENENews, Feb 4, 2014): 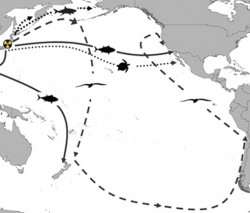 Carl Safina’s Blog, June 9, 2012 (emphasis added): Bluefin Tuna Carrying Safe Fukushima Nuclear Radiation […] Nicholas Fisher, in whose Stony Brook** lab much of the analyses were done, phoned to invite me to dinner with Dan Madigan, lead author of the published study, and Zofia Baumann […] Dr. Fisher hit me with the findings and I said, “Holy shit.” He explained that the fish were quite safe to eat, and I said, “Holy shit.” […] [Madigan] said he would expect that certain seabirds are also quickly spreading radiation across the ocean and I said, “Holy shit.” […] we spent a lot of time talking about the ubiquity of background radiation (even bananas have “radiation”), about safe levels of radiation […] We talked about migrations, about birds called sooty shearwaters and how they breed in New Zealand, fly past Japan, fly through Alaskan waters, come down the coast of California […] leatherback turtles […] migrate past Japan to feed in the jellyfish grounds off California and Oregon […]

Read moreMarine Expert On MSNBC: Months Of Uncontrolled Radioactive Releases From Fukushima A Problem For Pacific, Radionuclides Building Up In Food Chain

Juneau Empire, Jan. 23, 2014: The Department of Environmental Conservation isn’t actively testing fish for radiation, Commissioner Larry Hartig told the Senate […] Hartig said the state is relying on data and analyses from other coastal states, British Columbia and federal agencies […] Still, Sen. Cathy Giessel, R-Anchorage, said her constituents have come to her with concerns. Hartig said in an interview that the department tests fish regularly, just not for radiation. […] Hartig said it would be too expensive for the state to undertake a testing program that would be “statistically valid.” […] he’s concerned that people are being misinformed […] 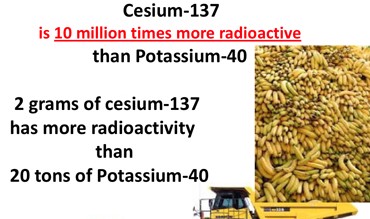 Cesium-137 emits 10 million times more radiation per unit volume than does potassium-40 found in a banana. (SOURCE: Steven Starr, Director of the Clinical Laboratory Science Program at the University of Missouri)