The best commentary I could offer is a link to a previous story:

But I’ll ramble on a bit more about this, anyway.

As soon as I became aware of the flooding situation in the American Midwest, I posted the story with the EMERGENCY prefix on the title. Just so we’re clear, when I write EMERGENCY at the beginning of a post title, this is my way of indicating that the situation is as serious as it gets. It means that I feel as though everyone reading should consider taking immediate evasive action. All the jawboning about conspiracy, how things could have been, how things should be, etc. are behind us now. You know, EMERGENCY, act fast, eyes wide, nostrils flared, etc.

While the food supply situation has skated along a knife edge so far this year, with higher prices and many countries experiencing food riots, widespread famine did not take hold. In an incredible move, the Japanese quietly eased rice shortages by releasing portions of their imported rice stockpiles-from giant warehouses in Tokyo-into the system; a welcome but one off blip in the big picture. What happens next time?

Now, this growing season, when yields need to be at record levels to avert disaster, what do we find? Floods or droughts in several of the breadbaskets of the world.

Whatever your plans are, I hope that you’re ready to execute them (or, better yet, are executing them). I’m pretty sure that most people have done nothing, and I don’t know why this continues to amaze me.

How can so many people, even those who should know better, be content to hit the wall without doing anything at all to change course? This includes my own family, who lives in Southern California.

I view Southern California as one of the most dangerous death traps in the world. Since it’s such an important focus of economic activity, though, I like to keep tabs on herd activity there, just for my own situational awareness. I can’t get a meaningful response from my dad-who thinks that traffic jams everywhere in the region and at all times of the day and night represent ‘progress’-I emailed someone there who’s about to flee to a country in Northern Europe. I asked if there was even a subtle sense of panic setting in with regard to the food and fuel prices. Here is part of the response I received:

I have noticed that most people don’t even have instinct enough to panic and hoard, and they wouldn’t know *what* to hoard. They don’t cook, they don’t know what a ‘staple’ means. A young woman in my training last week brought animal crackers and cheese ruffles for breakfast, and a box of Cheezits and Coke Zero for lunch. I asked her mockingly if she’d tried fruit or vegetables, she said she couldn’t afford them. I once saw a woman behind me at Ralphs with food stamps, and she was buying cottage cheese, dry pinto beans, and wheat bread, and told her kid to put the Doritos back. If you don’t have that kind of sense to begin with, the current situation is not going to give it to you.

We’re now well into a phase where system maintenance depends on the inability of the herd to grasp the nature of the immanent threat. “Yes, Kevin,” you say. “Same as it ever was.”

I don’t think so. The food situation is far off the radar screens of Joe Average. It only becomes a problem after it’s too late to do anything substantive to ameliorate conditions. We’ve already seen food riots, armed escorts for grain deliveries, rationing, sharply higher prices. And still, I’m mostly noticing yawns and drugged gurgles from the herd. Meanwhile, the die is all but cast on this year’s lower crop yields.

If the herd had any idea of what was coming, this show would be over inside of 24 hours. You might be sick of reading this on Cryptogon, but, it’s worth repeating: Use your time wisely.

Consumers were warned to expect even sharper increases in global food prices after US officials said that some of the country’s best farmland was facing its worst flooding for 15 years.

Agriculture officials and traders said the damage could push up worldwide corn and soyabean prices, which have spiralled in recent days as floods have swamped crops in parts of Iowa, the US’s biggest corn-producing state.

The warning comes at a time when high food prices are already sparking protests across the developing world.

Corn futures in Chicago this week rose to record highs of more than $8 a bushel on fears that up to 5m acres of the crop could be lost, while soyabean prices hit a record of $15.93 a bushel.

Read moreThe Best Farmland in the U.S. Is Flooded; Most Americans Are Too Stupid to Panic 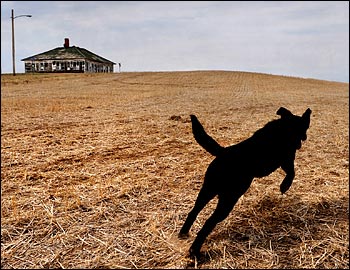 Biofuel production, poor harvests and emerging nations’ growing appetites are emptying the world’s pantry, sending prices soaring. It’s a good time to invest in agricultural stocks.
As if a bear market, U.S. credit crunch, energy crisis and city financing emergency were not enough for one year, experts say the world is now facing down the barrel of the worst catastrophe of all: famine.

The very idea that the modern world could run out of food seems ludicrous, but that is the flip side, or cause, of the tremendous recent increase in the cost of raw wheat, corn, rice, oats and soybeans. Food prices are not escalating because speculators have run them up for sport and profit, but because accelerating demand in developing nations, biofuel production and poor harvests in some areas have made basic foodstuffs truly scarce.

(In this article: …global grain reserves are “precarious,” at just 1.7 months of consumption, down from 3.5 months of reserves as recently as 2000.”…)

Read moreCould we really run out of food?