– Bernie Sanders: ‘I am proud to stand with her’:

The most important political moment of the night came when Sanders delivered the full-throated endorsement that the Clinton campaign had longed for.

“Any objective observer will conclude that — based on her ideas and her leadership — Hillary Clinton must become the next president of the United States,” Sanders told delegates, spurring a cascade of cheers.

Read moreBernie Sanders: ‘I am proud to stand with her’ – Jim Stone: Sanders is the troll I always thought he was 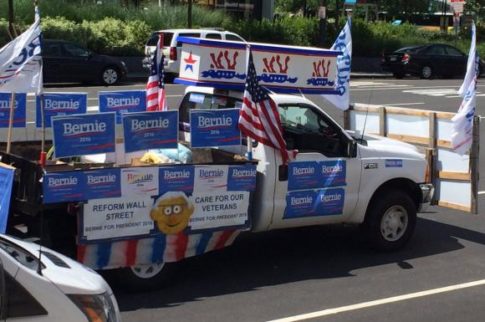 – Meanwhile At The DNC In Philly…

There are three key findings to emerge from yesterday’s dump of leaked DNC emails released by Wikileaks:

First, a quick recap for those who missed the original report, yesterday Wikileaks released over 19,000 emails and more than 8,000 attachments from the Democratic National Committee. This is what the whistleblower organization reported:

– CNN: Many Sanders Supporters Say ‘No Way’ They Will Support Clinton Because of Her Trust Issues

… but he endorsed Hillary …

The U.S. Senate has supported a move to begin debate on the Roberts-Stabenow GMO labeling bill, also known as the new DARK Act, that would wipe out states’ ability to require GMO labeling and replace it with an ineffective federal program. Senators voted 65-32 in favor of advancing the misleading bill.

U.S. Presidential candidate, Senator Bernie Sanders, tweeted Wednesday; “The Stabenow-Roberts GMO bill is confusing, misleading and unenforceable. It does nothing to make sure consumers know what they’re eating.”

– Sanders endorses Clinton: She is best candidate to address crises we face

– 5 Things the Establishment Slipped By You While Focusing Solely on Orlando Shooting (Video):

The article below epitomizes life during the Obama Presidency: “Whenever there’s a big story in the media, look for the story they’re trying to distract you from!” Claire Bernish does a great job highlighting 5 things the establishment slipped by most people while everyone was focusing solely on the Orlando shooting. I covered several of the ones listed below and many more in a recent video here, and there are links to plenty more at the bottom.

Arguably, the most serious of the stories ignored by the mainstream media is the massive voter fraud that has been detected in 11 states. The story is covered in the video below starting around the 3:30 mark.

By the yardstick used by the US government to identify fraud in foreign elections (a discrepancy of greater than 2% between election polls and exit polls), there is strong indication of fraud in Democrat primaries in 11 states. All the discrepancies favored Hillary Clinton over Bernie Sanders. The Institute for American Democracy and Election Integrity is about to file a lawsuit alleging racketeering. We look at Edison Research Polling, the National Election Pool (NEP), electronic voting and mainstream media.

WOULD YOU EXPECT ANYTHING LESS FROM THE CLINTON’S?

The Free Though Project Writes:After any major tragedy, we develop an obsessive need to analyze, debate, and argue every conceivable aspect of what’s taken place — as if time stops. That tragedy dominates mainstream and, often, independent media headlines for days or weeks, exhaustively positing theory after theory until the public begins to lose interest.

But tragedy doesn’t occur in a vacuum, and — though it might feel as if the world pressed pause to allow society to grieve — important, pertinent issues continue to arise while our attention is trained elsewhere.