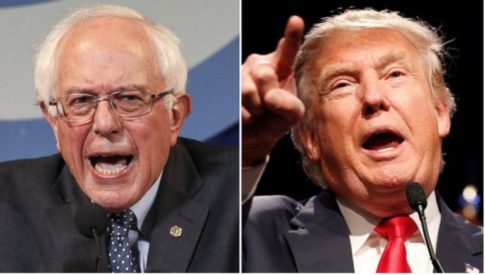 – Trump’s Decision To Debate Sanders In California Is His Most Genius Move Yet:

If the Trump/Sanders debate proceeds as planned in California, you’re about to witness one of the most important moments of a 2016 general election that hasn’t even begun yet. To say such a debate would be an unmitigated disaster for Hillary Clinton would be the understatement of the century. Let’s explore why.

First of all, Hillary Clinton outright rejected a debate request from Bernie Sanders ahead of the June 7th California primary. Given Sanders’ recent momentum, as well as her need to persuade a significant number of his supporters to back her in November; such a denial was not only arrogant, it was highly insulting to voters in America’s largest state. From team Clinton’s perspective there was little upside to agreeing to a debate, versus easily manageable downside from a few days of negative media coverage.

Or so they thought…

The above strategic thought process would’ve worked in almost every other election season and against any other candidate. Unfortunately for her, it doesn’t work in 2016, and it certainly doesn’t work against Donald Trump.

Trump understands human nature as well as anyone I’ve ever observed. He’s also likely the most skilled natural politician of my lifetime, with perhaps the exception of Bill Clinton in his prime. Under conventional thinking, Trump would also certainly deny a Sanders debate request for the same reasons Clinton declined it. There’s little to gain in publicly battling a guy with nothing to lose, and you’ve already wrapped up the Republican nomination anyway. That said, Trump is far too savvy to fall victim to such straightforward thinking. He understands that debating Sanders in California ahead of the primary presents a once in a lifetime opportunity to embarrass and belittle Clinton in front of the whole world before the general election even begins.

Think about it for a second. Who cares what happens during the debate itself. Think about what the media will be saying. Think about how weak, irrelevant and stupid a Trump/Sanders contest will make Hillary Clinton look. As the largest state in the union heads to the voting booths Hillary Clinton can’t be bothered to have a discussion with Bernie Sanders, yet Donald Trump is more than willing. I can see the headlines already:

Where in the World is Hillary?

Hillary Nowhere to be Found in California Primary.

You get the point. Trump will appear Presidential, while Hillary will look like a discredited Goldman Sachs crook hiding from a 74-year-old socialist. Which, by the way, is exactly what she’s doing.

Naturally, the whining hordes of Clinton sycophants and paid online trolls who don’t think they should have to work to secure the Presidency, will bitch and moan at Sanders. They’ll blame him for all her problems, when the truth is this disaster, like most of her disasters, is entirely of her own making. Hillary Clinton was offered the opportunity to debate Sanders in California. She declined. You can’t blame Trump for jumping on the opportunity to make her look extraordinarily stupid. That’s just politics.