“Have I missed something, or simply “misunderestimated” the deviousness of US politicking?” 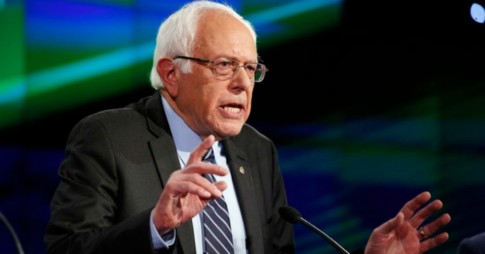 “If we do not address the global crisis of climate change, transform our energy system away from fossil fuels to sustainable energy, the planet that we’re going to be leaving our kids and our grandchildren may well not be inhabitable,” Sen. Sanders declared during the first Democratic debate on october 13. (Photo: AP)

– Bernie Says: No Bones About It, Our Biggest Threat is Climate Change:

When asked during the Democratic debate Tuesday night to name the biggest national security threat facing the United States, Sen. Bernie Sanders did not bat an eye before answering: “The global crisis of climate change.”

“The scientific community is telling us: if we do not address the global crisis of climate change, transform our energy system away from fossil fuels to sustainable energy, the planet that we’re going to be leaving our kids and our grandchildren may well not be inhabitable,” Sanders said. “That is a major crisis.”

However, the Independent senator from Vermont’s response most closely echoed the concern of a majority of people worldwide, particularly those in the global south, where communities are most at risk from the impacts of global warming. U.S. military leaders, as well as President Barack Obama, have also identified global warming as an “immediate risk to our national security”—which viewers Monday evening were quick to note:

Overall, environmentalists and progressives were thrilled to see the threat of climate change given due attention.

I think @BernieSanders is exactly right–biggest threat to natl sec. is climate change. And he’s been leading the charge for a long time now

Meanwhile, those on the other side of the political spectrum had their own take on the matter.

They believe climate change is a greater threat than Islamic extremism, that a sunburn is worse than a beheading. It’s nonsense! #DemDebate