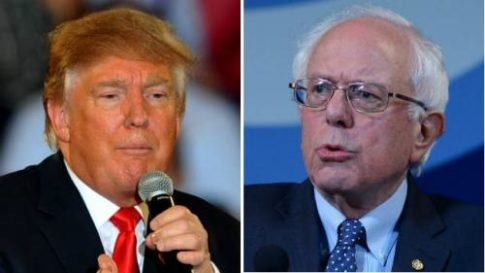 Having already scored a political victory by redirecting the news cycle to his proposal to debate Bernie Sanders in lieu of a debate between the Vermont socialist and Hillary Clinton, Donald Trump moments ago decided to also slam Sanders himself as well as the democratic race, when the Republican presidential nominee announced that he will not participate in a debate with Bernie Sanders, as “it seems inappropriate that I would debate the second place finisher” and also because the networks who “want to make a killing on these events and are not proving to be too generous to charitable causes.”

Based on the fact that the Democratic nominating process is totally rigged and Crooked Hillary Clinton and Deborah Wasserman Schultz will not allow Bernie Sanders to win, and now that I am the presumptive Republican nominee, it seems inappropriate that I would debate the second place finisher. Likewise, the networks want to make a killing on these events and are not proving to be too generous to charitable causes, in this case, women’s health issues. Therefore, as much as I want to debate Bernie Sanders – and it would be an easy payday – I will wait to debate the first place finisher in the Democratic Party, probably Crooked Hillary Clinton, or whoever it may be.

“Our campaign and the Trump campaign have received two offers by broadcast television networks to host the Sanders-Trump debate that we suggested. Both offers include a major contribution to charity,” Sanders campaign manager Jeff Weaver said in a statement on Friday. “We are prepared to accept one of those offers and look forward to working with the Trump campaign to develop a time, place and format that is mutually agreeable. Given that the California primary is on June 7, it is imperative that this all comes together as soon as possible. We look forward to a substantive debate that will contrast the very different visions that Sen. Sanders and Mr. Trump have for the future of our country.”

Will Trump’s decision finally prompt Hillary to take on the debate with Bernie which she has shied away from, leading to this latest media spectacle?  Meanwhile, Trump continues to play the “networks”, the media and their pundits like puppets, eager to soak up every decision and statement he makes, while evern the runner-up Democratic challenger has confirmed he is desperate for the kind of media exposure only Trump can provide.

Of course, in the end the debate may well be between Trump and Joe Biden if the noose which tightened around Hillary Clinton with the OIG report’s release this week is any indication which way the democratic campaign is headed.