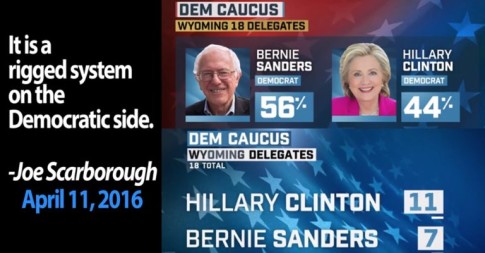 While it might sound strange, a coronation of Hillary Clinton in the Democratic primary will mark the end of the party as we know it. There’s been a lot written about the “Sanders surge,” with much of it revolving around Hillary Clinton’s extreme personal weakness as a candidate. While this is indisputable, it’s also a convenient way for the status quo to exempt itself from fault and discount genuine grassroots anger. I’m of the view that Sanders’ support is more about people liking him than them disliking Hillary, particularly when it comes to registered Democrats. He’s not merely seen as the “least bad choice.” People really do like him.

The Sanders appeal is twofold. He is seen as unusually honest and consistent for someone who’s held elected office for much of his life, plus he advocates a refreshingly anti-establishment view on core issues that matter to an increasing number of Americans. These include militarism, Wall Street bailouts, a two-tiered justice system, the prohibitive cost of college education, healthcare insecurity and a “rigged economy.” While Hillary is being forced to pay lip service to these issues, everybody knows she doesn’t mean a word of it. She means it less than Obama meant it in 2008, and Obama really didn’t mean it.

– From the post: It’s Not Just the GOP – The Democratic Party is Also Imploding

Unless you’ve been living in a cave, you’ll know that New Yorkers go to the primary voting booths on April 19th. Unfortunately, only a small sliver of the population will actually be able to vote. First, it’s a closed primary, so you have to be registered as a member of one of the two corrupt political parties in order to participate. As the Guardian recently reported, 27% of New York state’s active voters were not registered in either party as of April 2016, meaning these people will have no say in the primary. Even worse, what about all those residents who aren’t active voters, but would very likely vote in this particular election given the increased turnout seen in other states? They’re iced out as well.

New York has one of the most archaic primaries in the nation. Not only is it one of only 11 states with closed primaries, but if you are a registered voter who wanted to change your party affiliation in order to vote in next week’s primary, you would’ve had to do it by last October. In contrast, if you weren’t yet a registered voter you had until March 25th to register under one of the two parties in order to vote in the primary. So if you live in New York and haven’t registered by now, you can’t vote.

As the Guardian reports:

A lot has changed in the presidential primaries since 9 October 2015. Back then, a CBS News poll showed Hillary Clinton beating Bernie Sanders nationally by nearly 20 points; if Joe Biden had entered the race, the same poll suggested Clinton would beat Sanders by 24 points. She was, in the minds of many liberal voters, the inevitable Democratic nominee.

Quietly on that same day, the New York state board of elections’ deadline to change party affiliation passed, leaving any registered voters not identified as a Republican or a Democrat with no way to vote in the 19 April 2016 primary.

The deadline to register to vote for the first time in the New York primary passed on 25 March 2016; there is no in-person registration in the state, even to cast a provisional ballot.

As New York’s primary approaches, it is only now that many would-be voters are realizing they will be unable to vote next Tuesday.

New York is one of only 11 states with closed primaries – ie primaries in which only voters who are registered as Republicans or Democrats are allowed to cast ballots – and it is the only state in which currently registered voters must declare their party affiliation more than six months before a primary in order to vote.

More than 2.9 million of New York’s 10.7 million active voters were not registered Democrats or Republicans as of April 2016 – in part because at least some of them found out after 9 October 2015 that, beginning that day, they could not change their party affiliation until 15 November.

I am of the belief that Hillary Clinton will beat Bernie Sanders in New York in large part because of the above situation. She’ll win in New York the same way she’s won everywhere, by getting the votes of old people who’ve been registered as Democrats since the 60s. Fortunately for her, those are most of the people who’ll be voting next Tuesday.

So while we’re on the topic of the lack of democracy within the Democratic Party, take a watch of this short clip from MSNBC.

Mind-boggling that we put up with this nonsense.

“Bernie or Bust” – Over 50,000 Sanders Supporters Pledge to Never Vote for Hillary