Now a research team lead by the University of Minnesota has found evidence that the penguins are simply shifting their place. Sort of like you hiding in the shade of a tree or house when the sun is shining too hot or hiding behind a wind break when the breeze is too cold. In other words, they just moved to a more hospitable area. The scientists concluded that “the penguins are more adaptable and smarter than previously thought.”

Given the recent record advance of ice cover in the Antarctic, it is more likely than not that the penguins were actually trying to get better shelter from the biting cold than any torching heat. Well, at 50 F below I would be inclined to seek better shelter too and would tell the global warming believers to go to the nearest expletive.

Along with summertime snow

“Snowfall on both sides of the globe at the same time,”

And our President prattles on about “global warming.”

“Climate change used to be called global warming until it became undeniable to everyone except the charlatans lining their pockets with utterly bogus ‘research’.” – Alan Caruba

Snowfall surprised residents on Monday as white flakes floated down in Kerässiepissä.

Residents worried that the abnormal cold can ruin their vegetable gardens.

“Can you spell ‘WINTER storm watch’ after mid June?”

15 degrees below zero in most of the province of Neuquén.

Snow more than five feet (1½ m) deep in some areas.

But researchers pooh-pooh the evidence, insisting that the icy ground will only last another 70 years because of “global warming.”

People who tell you that Arctic sea-ice extent is controlled by CO2 are lying, says meteorologist

It’s not just a “pause” in global warming: According to NOAA, temperatures have been going down for nearly a decade. Down!

Of course, there’s nothing unusual about record cold.

This on top of the fact that it has already been the wettest first five months of a year on record.

Sixty-thousand head of cattle killed by the cold, and no mention in the mainstream media?

Plus, there’s still snow on the ground in Michigan — in freakin’ June.

“Some have even dubbed this month as Mayvember

Maybe even longer, because records didn’t begin until 1901.

Note: They don’t say this is the lowest temperature for the date, it’s the lowest for the entire month of May.

Professor killed by hypothermia while waiting for a bus.

CNN Chile knows about the record cold temperatures in Chile,” says reader. “But did you see this news item on CNN in the USA?”

Residents in the Serra da Estrela in central Portugal have seen roads shut down due to heavy snow falls.

Up to 20 cm (8 inches) of marble-sized hail reaches the bumpers on their cars.

Sea-ice coverage grew about 43,500 square miles per day in Antarctica this summer,

Rockford had never had accumulating snow after May 2nd … until this year… two weeks past the latest date.

“Whenever solar radiation has decreased and volcanic activity has increased, global temperatures suddenly plummet…often within weeks or months,”

I guess that should be enough!

Just when you thought it was safe to leave your shelter and buy a car, buy a home, buy some Caterpillar trucks, and buy a Starbucks; NOAA reports the globe just experienced the hottest May on record… With El Nino looming, we can only imagine the excuses of ‘extreme weather’ that will rear its ugly head once again in Q2 earnings… though of course all this will be fixed in Q3? 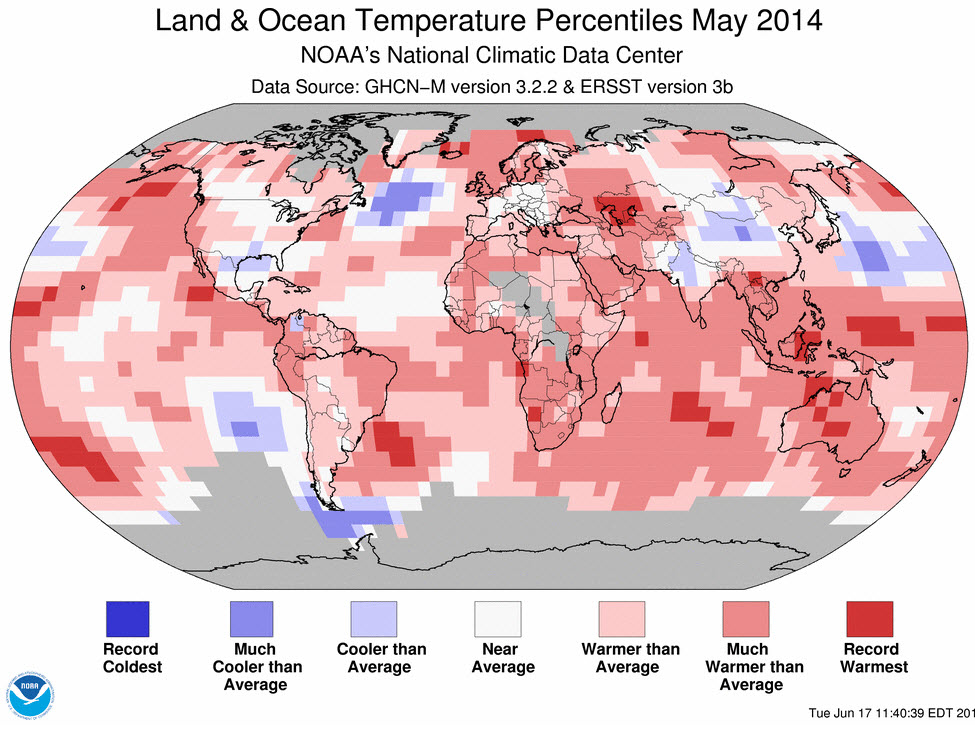 Well, like always, you decide for yourself what is ‘the truth’.

Since the beginning of Infinite Unknown I’ve been telling you to stockpile food & water and to get prepared on all levels.