Make no mistake, the financial crisis has only just begun.

This is The Greatest Depression. 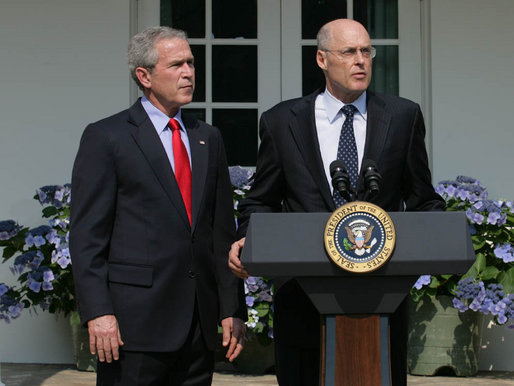 A friend sent me a collage of quotes from former Treasury Secretary Henry Paulson’s memoir of the financial crisis, On the Brink.  The quotes are particularly relevant in view of the Financial Crisis Inquiry Commission’s newly issued report which concludes that the 2008 financial crisis was badly mishandled by the government.

The collage paints a stunning picture of a confused and panicked government without a coherent strategy for getting in front of and containing the crisis.  Judge for yourself:

“I misread the cause, and the scale, of the coming disaster.  Notably absent from my presentation was any mention of problems in housing or mortgages.”  (p. 47)

“All of this led me in late April 2007 to say . . . that subprime mortgage problems were ‘largely contained.’  I repeated that line of thinking publicly for another couple of months. . . . We were just plain wrong.” (p. 66)

“General Electric . . . was having problems selling commercial paper.  This stunned me.” (p. 172)

“I expected [TARP] to be politically unpopular, but the intensity of the backlash astonished me.” (p. 370)

“I began to seriously doubt that our asset-buying program [TARP] could work.  This pained me, as I had sincerely promoted the [toxic asset] purchases to Congress and the public. . . .” (p. 385)

“AIG would need a massive equity investment.  I was shocked and dismayed.” (p. 376)

The Financial Crisis Commission has it precisely right.  The 2008 crisis was badly mismanaged, which led to a senseless worldwide financial panic.  We handled some 3,000 bank and thrift failures during the 1980’s, including many of the largest firms in the country (nine out of the ten largest banks in Texas for example) without creating a panic.  This compares to just 300 failures this time around.

The 1980’s provided a recent and highly successful model for handling a major financial crisis.  While the 2008 crisis had different origins and challenges, the basic principles of proper crisis management apply in both situations.  Clearly, Secretary Paulson did not have to “fly by the seat of his pants and make it up as he went along.”  He had a blueprint at his disposal.

In the crucible of 2008, crisis management became highly politicized.  Instead of being led and carried out by an independent Federal Reserve with the FDIC at its side, as was the case in the 1980’s, the 2008 crisis was managed by Treasury, a political agency with little experience or bench strength.

Rushing to Congress and using highly inflammatory and frightening rhetoric to demand a poorly conceived and unnecessary $700 billion TARP program, which Secretary Paulson ultimately decided would not work, created a political firestorm that still rages.

Financial markets and the public can handle almost anything except uncertainty.  If they believe they are being told the truth, someone is in charge with a sensible plan for dealing with the problems, and the system is aboveboard and fair, they can accept almost any negative news.

As is apparent from Secretary Paulson’s own words, the government’s actions in 2008 were ad hoc, inconsistent, and anything but prescient.  No one had an overall plan, statements were made that proved false, the public was provided with inadequate information, and decision making was dominated by political considerations and was far too Wall Street centric.  The markets and the public lost confidence and financial panic swept the world, including our own government.