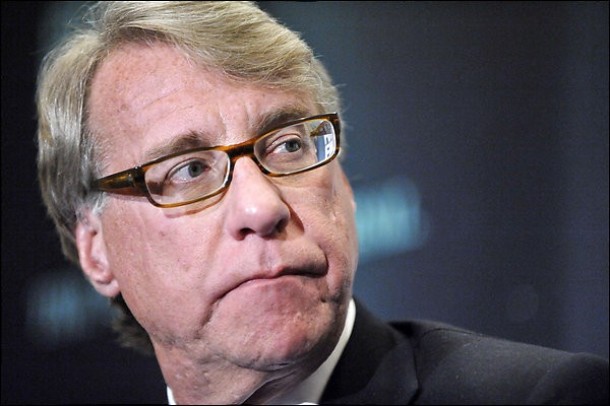 Last week had the opportunity to visit Kynikos Associates in Manhattan and speak with its President, famed short-seller James S. Chanos.

The billionaire hedge funder is the stuff of legend. He made a killing shorting companies like Tyco, Worldcom, and of course, Enron. Chanos spoke with us at length on everything from how he discovered Enron’s problems to the issues at hand with Greece to the ongoing problems in China.

We’ll be running several posts on our Q&A sessions with Chanos throughout the week.

Today we talk about Dubai, Greece, and the role of derivatives in these markets.

Business Insider: Let’s talk about Dubai and Greece. Dubai – was it just a case of a nation that saw too much growth and excessive debt?

Jim Chanos: No, no. Dubai was a property bubble. Plain and simple. Go to Dubai and see what happened. It was…what I call it the “Ediffice complex” – it’s just, we can grow by putting up lots and lots of buildings and trying to attract people to come here, stay here, and put up offices here and sooner or later, you put up too many. And whether it’s the Palm Island project or the indoor ski resort or, you know, take your pick because everyone has lots of Dubai stories. At first it seemed plausible and economic and by the end of the boom, they were putting on drawing boards all kinds of crazy projects. So it didn’t take a rocket scientist to see the excesses. They were pretty visible to the naked eye.

Greece is a different issue. We’re not involved. We don’t trade sovereign debt, we don’t trade CDSes. You know I feel bad for my mother country in that they’re going through a lot of austerity now and I actually think that the Prime Minister and his team are doing the right thing. I met with them recently, actually, in Washington [DC] and they gave a pretty rational response to a problem that they, quite frankly, inherited.

You know they came in and discovered the hole in the budget deficit and discovered a lot of the off balance sheet stuff that was not of their doing. And he’s taking the politically unpopular step of extending the retirement age and cutting government wages not knowing if it’s going to be enough and so far the market is pretty skeptical, but I think the Greek government is being more courageous than some of the other western-European governments who aren’t addressing these issues and are going to be facing these same problems like Greece down the road. So Greece is a prelude to the problems that a lot of other countries will face that have made promises to their people without the ability to pay for them.

BI: I heard from Kyle Bass that Greece has defaulted on their debt a lot of times in the past 200 years…

JC: Yes, but so has France, so has Germany, so has Argentina – a number of western sovereign countries have defaulted repeatedly over the past 200 years. If you take a look at the recent book by Ken Rogoff, “It’s Different This Time,” where you have a table of these defaults – Greece is not alone in that table. Some would say that when the US rescinded the gold standard in the 1930s, that we did too. So you know, everyone points out Greece’s default record, but the history of a lot of sovereign nations is not a good one when it comes to lending them money.

BI: I would imagine, especially in regard to Argentina. It was very guilty in the last century. But with Greece, do you see an easy fix for the problem?

JC: They’re embarked on what they should be doing. I don’t think that austerity is going to be easy because of the political ramifications and that is the real problem that they’re fighting. They’re fighting both financial market perceptions and a bad domestic political situation. It’s a tough one. It’s really a tough set of problems. The solutions to both are almost diametrically opposite. And so he [Papandreou] is going to pay the price politically. Are they going to get EU help and IMF help? Everything seems uncertain now. But as I said, I was at least impressed that Papandreou’s team understood the problem and understood the issues and understood the magnitude of the problems even if it wasn’t of their doing. And they’re taking tough domestic political steps that I think a lot of other governments would be afraid to take. So I have to admire them for that.

BI: With Greece, it was revealed recently that Goldman got them into these currency swaps that caused problems.

JC: Who knows? I don’t want to comment on the specifics of that situation, but I think that you have a lot of sovereign banks in Europe that were also pretty much knee-deep in a lot of this stuff. There were Greek banks themselves that were trading derivatives. We did a survey of all the Greek banks as to how much of their pre-tax profit was from trading activities, including derivatives, and in many cases it was north of 20, 30%. It’s the nature of the current financial system…just how much of the profits of our banking system globally come from trading derivatives and debt. It’s a lot.

BI: And do you think that derivatives are ultimately a good thing that are there for proper hedging and speculation?

JC: I always laugh when I hear someone talking about “Well, we can’t have somebody buying CDSes on debt that they don’t own. If they don’t own the underlying…”

JC: Yes, a naked CDS. But what people forget is that the CDS market was created exactly for that. Because if you are a creditor of that government with a non-marketable instrument, say Greece owes you money, say Greece has promised to fund your projects. You don’t own a Greek bond. You can’t market that IOU, but you have economic risk. Your project may be imperiled if Greece cannot fund it as promised. The only way you can hedge that off is through the CDS market.

So that’s exactly why the CDS market was invented. Not just to hedge sovereign debt instruments, because you can simply sell those instruments if you’re bearish! It’s actually to hedge off non-marketable instrument risk. We saw the same thing during the banking crisis when people started saying “Oh there’s been an explosion of buying CDSes on banks, and short-selling the shares of banks in the Spring and Fall of ’08.”

JC: Yes. What I kept saying was: “Um, you might want to check with the other banks, because the biggest exposure that banks have is to each other. Their own counterparties!”

JC: Yes, it’s systemic. And so it can be very much in the interest of bank A to sell-short bank B shares, or buy CDSes on bank B, because they have exposure to bank B. It’s the responsible thing to do as a fiduciary, and yet if everyone does it at the same time, it’s destabilizing because everyone is selling.

The whole CDS market criticism to me is a little bit specious in that CDSes were specifically to hedge off or speculate, to be fair, non-marketable financial exposure to companies or governments. We saw it in Enron, actually because there was a nascent CDS market in Enron debt when Enron went under, and there was a huge explosion towards the very end of Enron’s corporate life, in short-selling and CDS buying, and it was not primarily hedge funds and speculators – it was people who had had counterparty risk to Enron. Enron would be unable to perform under a contract and suddenly people realized they could abrogate that contract.

So before we throw the baby out with the bathwater, and talk about naked CDSes or whatever, we ought to start thinking about what exactly CDSes were set up to do. Derivatives in and of themselves are not evil. There’s nothing evil about how they’re traded, how they’re accounted for, and how they’re financed, like any other financial instrument, if done properly.

JC: Yes, as I’ve said…people don’t think the whole thing through. And you know, I knew clients of Bear Stearns during the real estate boom. Bear Stearns had funding commitments to these people. And the only way they could get their projects funded was if Bear Stearns Realty went under, was to buy CDSes on Bear Stearns. Same thing with Lehman.

We saw it in the AIG situation where people were trying to hedge off their AIG exposure, and the government made good on AIG. This was the inter-connected nature of the risk in those markets, the over-concentration in a number of very large players, coupled in many cases with poor accounting. So it all was a witches brew that has led to the current set of problems. But before we completely blame derivatives for the downfall of western civilization, we have to first understand what they’re really all about.

Stay tuned the rest of the week for Chanos’s thoughts on China, Enron, and the state of the market.