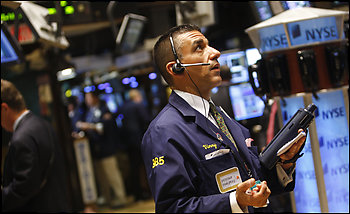 Vincent Quinones works on the floor of the New York Stock Exchange Wednesday after the Federal Reserve issued a mixed assessment of the economy. Yesterday, the Dow Jones industrial average closed down 358 points. (By Andrew Harrer — Bloomberg News)

So much for that second-half rebound.

Truth be told, that was always more of a wish than a serious forecast, happy talk from the Fed and Wall Street desperate to get things back to normal.

It ain’t gonna happen. Not this summer. Not this fall. Not even next winter.

This thing’s going down, fast and hard. Corporate bankruptcies, bond defaults, bank failures, hedge fund meltdowns and 6 percent unemployment. We’re caught in one of those vicious, downward spirals that, once it gets going, is very hard to pull out of.

Only this will be a different kind of recession — a recession with an overlay of inflation. That combo puts the Federal Reserve in a Catch-22 — whatever it does to solve one problem only makes the other worse. Emerging from a two-day meeting this week, Fed officials signaled that further recession-fighting rate cuts are unlikely and that their next move will be to raise rates to contain inflationary expectations.

Since last June, we’ve seen a fairly consistent pattern to the economic mood swings. Every three months or so, there’s a round of bad news about housing, followed by warnings of more bank write-offs and then a string of disappointing corporate earnings reports. Eventually, things stabilize and there are hints that the worst may be behind us. Stocks regain some of their lost ground, bonds fall and then — bam — the whole cycle starts again.

It was only in November that the Dow had recovered from the panicked summer sell-off and hit a record, just above 14,000. By March, it had fallen below 12,000. By May, it climbed above 13,000. Now it’s heading for a new floor at 11,000. Officially, that’s bear market territory. We’ll be lucky if that’s the floor.

In explaining why that second-half rebound never occurred, the Fed and the Treasury and the Wall Street machers will say that nobody could have foreseen $140 a barrel oil. As excuses go, blaming it on an oil shock is a hardy perennial. That’s what Jimmy Carter and Fed Chairman Arthur Burns did in the late ’70s, and what George H.W. Bush and Alan Greenspan did in the early ’90s. Don’t believe it.

Truth is, there are always price or supply shocks of one sort or another. The real problem is that the underlying fundamentals had gotten badly out of whack, making the economy susceptible to a shock. The only way to make things better is to get those fundamentals back in balance. In this case, that means bringing what we consume in line with what we produce, letting the dollar fall to its natural level, wringing the excess capacity out of industries that overexpanded during the credit bubble and allowing real estate prices to fall in line with incomes.

The last hope for a second-half rebound began to fade earlier this month when Lehman Brothers reported that it wasn’t as immune to the credit-market downturn as it had led everyone to believe. Lehman scrambled to restore confidence by firing two top executives and raising billions in additional capital, but even that wasn’t enough to quiet speculation that it could be the next Bear Stearns.

Since then, there has been a steady drumbeat of worrisome news from nearly every sector of the economy.

American Express and Discover warn that customers are falling further behind on their debts. UPS and Federal Express report a noticeable slowdown in shipments, while fuel costs are soaring. According to the Case-Shiller index, home prices in the top 20 markets fell 15 percent in April from the year before, and Fannie Mae and Freddie Mac report that mortgage delinquency rates doubled over the same period — and that’s for conventional home loans, not subprime. United Airlines accelerates the race to cut costs and capacity by laying off 950 pilots — 15 percent of its total — as a number of airlines retire planes and hint that they may delay delivery or cancel orders of new jets from Boeing and Airbus. Goldman Sachs, which has already had to withdraw its rosy forecast for stocks, now admits it was also too optimistic about junk bond defaults, and analysts warn that Citigroup and Merrill Lynch will also be forced to take additional big write-downs on their mortgage portfolios.

Meanwhile, General Motors, already reeling from a 28 percent plunge in the pace of auto and truck sales, now confronts the fact that it won’t get any help this time from GMAC, its once highly profitable finance arm, which is reeling from an increase in delinquencies on home and auto loans. With the carmaker hemorrhaging cash, whispers of a possible default sent the price of insuring GM bonds soaring on the credit default market.

You know things are bad when middle-class Americans have to give up their boats and Brunswick, the nation’s biggest maker of powerboats, is forced to close 10 plants and lay off 2,700 workers.

For much of the year, optimists took comfort in the continuing strength of the technology sector and exports to fast-growing countries around the world. But even those bright spots have dimmed.

Tech stocks got hammered yesterday after software maker Oracle and BlackBerry maker Research in Motion warned that the pace of corporate orders had slowed.

And both India and China raised interest rates and bank reserves sharply in an effort to tame inflation and slow their overheated economies, even as the air continued to rush out of their real estate and stock market bubbles.

Like the rain-swollen waters of the Mississippi River, this sudden surge of downbeat news has now overflowed the banks of economic policy and broken through the levees of consumer and investor confidence. At this point, there’s not much to do but flee to safety, rescue those in trouble and let nature take its course. And don’t let anyone fool you: It will be a while before things return to normal.

Steven Pearlstein can be reached at pearlsteins@washpost.com.