Staff at the Northeast Atlanta Health and Rehabilitation Center laughed as a decorated World War II veteran took his last gasps of air after frantically calling for help six different times, according to a shocking new investigation from 11Alive.com.

The investigation included the release of a never before seen hidden camera video that not only completely contradicted statements given by the nursing home staff but also proved, without a shadow of doubt, that the nursing home essentially let the decorated veteran die as if it were a joke.

The video is so disgusting that attorneys for the nursing home repeatedly tried to stop its release, going through a series of court battles with the local news station in which they hoped that the media would be ordered to censor the footage.

– The Republican establishment is a total disgrace for blocking cannabis medicine for wounded veterans – Health Ranger:

The Republican establishment recently blocked veterans’ access to medical marijuana, making sure our veterans remain addicted to dangerous, deadly opioids. The Veterans Equal Access amendment was blocked by the Republican-led U.S. House, ensuring that Big Pharma continues to cash in on the biological destruction of returning veterans.

The very political party that claims to be pro-military, in other words, has just thrown veterans to the pharma dogs. This, coupled with the routine prescribing of mind-altering psychiatric drugs to veterans after near-instant “PTSD” diagnoses means that our brave men and women in uniform have in many cases been turned into pharmaceutical receptables for the profit interests of the drug industry.

It is an absolute disgrace that our veterans are being denied access to medical marijuana / cannabis medicine. In making this decision, the GOP establishment has become a shameful embarrassment to this nation, routinely putting the profit interests of their big corporate donors over the humanitarian protection of America’s soldiers and veterans.

– USMC Veteran Facing Life in Prison Over 1 Oz. of Cannabis to Treat His PTSD:

Geronimo, OK — After serving three tours in Iraq and Afghanistan, Kristoffer Lewandowski was medically and honorably discharged from the Marine Corps. After fighting the State’s wars for them, however, the State has taken it upon themselves to wage a personal war against him — for naturally treating an illness — he acquired fighting for them.

Lewandowski is now a 100% disabled veteran because of the severity of his PTSD. Since he has gotten out, the VA had him taking up to 18 pills a day to treat his PTSD. This pharmaceutical treatment was literally killing him.

At 180 Percocet per month, for ten consecutive months, along with a prescription for OxyContin, Lewandowski’s liver was failing. Luckily, for this Marine veteran, he found cannabis — and it worked.

Shortly after Starbucks CEO Howard Schultz penned a letter in which he promised to hire 10,000 refugees over the next five years in the aftermath of Trump’s immigration executive order, a veteran-run coffee company has issued a rejoinder to Starbucks, promising to hire 10,000 veterans itself according to Fox News.

Black Rifle Coffee Company, or BRCC, which describes itself as a “premium small-batch, roast to order, veteran owned and operated coffee company” responded to Starbucks – or “Hipsterbucks” as they call the global coffee chain – announcing a pledge via Instagram to hire 10,000 veterans. This is what CEO Evan Hafer tweeted on Wednesday.

The company’s announcement was greeted on Twitter, especially by those who viewed Starbucks’ announcement as hypocritical:

Washington, D.C. – In a show of solidarity with the Standing Rock Sioux, U.S. Congresswoman Tulsi Gabbard, a Hawaii Democrat who served two tours of duty in the Middle East, and who continues to serve as a Major in the Army National Guard, announced that she will be joining thousands of veterans coming from across the country to protest the building of the Dakota Access Pipeline (DAPL) near the Standing Rock Reservation.

“If my participation in this protest helps send one message, it is this: We must protect our fragile water resources for current and future generations,” said Gabbard, who has been involved in environmental activism since her youth.

– Hundreds of Veterans Heading to Standing Rock to Defend DAPL Protesters from Police:

As protesters continue to stand against the proposed Dakota Access Pipeline in North Dakota, facing off against heavily militarized police and their water cannons, rubber bullets, tear gas, and tasers, they have gained broad support. Celebrities and millions of social media users have raised awareness about the situation in North Dakota, and now, the “water protectors” have earned support from another group: veterans.

According to an article published by Business Insider that first appeared in Task and Purpose, a military-oriented news and culture site, two veterans are leading the charge in a show of dissent against the increasingly aggressive police. In the last several months, tensions have escalated as Natives and their allies have blocked the pipeline’s construction, citing fears surrounding water will be endangered and sacred burial sites will be destroyed (not to mention the fact their lands were forcibly stolen by the U.S. government over a century ago).

“Can you believe this hypocrisy?

The man (a moron in anyone’s language) shows no shame.” 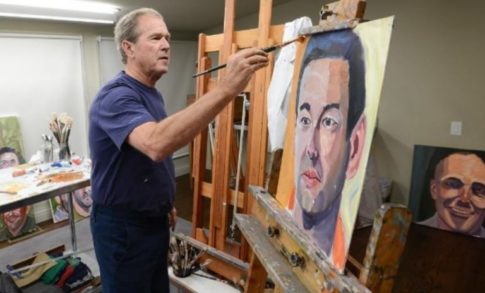 – George W. Bush Paints Portraits Of The Veterans Who Were “Injured Carrying Out My Orders”:

This Veterans Day, former president George W. Bush revealed one of his favorite hobbies and talents, painting portraits. However, there was an extremely disturbing twist.

This week, Bush posted a photo to his official Instagram account, showing himself in an art room painting portraits of the veterans who were injured carrying out his orders. He was even brazen enough to describe the situation in those exact words.

In the caption below the photo, Bush said,

Over the past several months, I’ve painted the portraits of 98 wounded warriors I’ve gotten to know – remarkable men and women who were injured carrying out my orders. I think about them on #VeteransDay and every day. Their paintings and stories will be featured in PORTRAITS OF COURAGE – a book and special exhibit – next spring, and I am donating all my proceeds to @thebushcenter and our Military Service Initiative’s work to honor and support them. Click link in bio for more info.

Is this a slap in the face to the veterans who Bush sent to be injured and die in senseless wars, or does he actually have remorse for the part he played in the conflicts?

The portraits will also be featured in a book that will be released by the former president and will tell the stories of the veterans depicted in the paintings.

For some reason, despite the fact that Bush said he painted 98 veterans, the official “portraits of courage” series consists of a total of 66 images, according to the website.

66 is a bit of a strange number for them to select, don’t you think?

The paintings in the book will be the subject of a special exhibit at the George W. Bush Presidential Center in Dallas on the campus of SMU that will be open to the public from March 2, 2017 through October 1, 2017.