“Cannon Fodder. Here’s to the dumb kids with no job prospects who are picked carefully by shopping mall Army recruiters to partake in becoming Kissinger’s CANNON FODDER. Let’s hope they or their parents wake up before they fall for the false “Glory for your Country” utter Bullshit and sign their death warrant/Vets disability/suicide end game which is never for the country and ALWAYS for the Banksters & Global Corporatocracy.”

– 76-Year-Old Veteran Kills Himself In VA Parking Lot After Being Denied Treatment:

A 76-year-old military veteran killed himself outside a Long Island Veteran Affairs facility Sunday after being denied treatment. He was reportedly seeking help for mental health issues at the Northport Veterans Affairs Medical Center but was turned away, an unfortunately common experience plaguing veterans seeking healthcare in recent years.

According to the New York Times, two people connected to the hospital spoke about the incident on the condition of anonymity. They explained “he had been frustrated that he was unable to see an emergency-room physician for reasons related to his mental health,” the Times reported.

“He went to the E.R. and was denied service,” one anonymous source said. “And then he went to his car and shot himself.”

– Veteran Commits Suicide Hours After Being Turned Away At VA Facility – Rest In Peace:

A former Marine and Army National Guardsmen killed himself after being denied admittance to a VA facility in Iowa City, despite telling doctors that he was having “serious mental issues.”

Brandon Ketchum, 33, killed himself only a few hours after being turned down at the Iowa City VA Medical Center on July 7th. He made an emergency appointment with the facility and spoke to doctors about his struggle.

Ketchum had been struggling with PTSD and substance abuse after returning home from his three tours overseas. He had deployed twice to Iraq as a Marine combat engineer where his job was to clear roadside explosives. He also served once in Afghanistan in the Army National Guard.

After getting turned away, Ketchum created a post on social media.

“I requested that I get admitted to 9W (psychiatric ward) and get things straightened out,” he wrote on Facebook. “I truly felt my safety and health were in jeopardy, as I discussed with the doc. Not only did I get a ‘NO’, but three reasons of no based on me being not f***** up enough. At this point I say, ‘why even try anymore?’ They gave up on me, so why shouldn’t I give up on myself? Right now, that is the only viable option given my circumstances and frame of mind.”

– OUTRAGEOUS: Veterans are now receiving letters prohibiting the purchase, possession, receipt, or transport of a firearm/ammunition…:

How would you feel if you received a letter from the U.S. Government informing you that because of a physical or mental condition that the government says you have it is proposing to rule that you are incompetent to handle your own financial affairs? Suppose that letter also stated that the government is going to appoint a stranger to handle your affairs for you at your expense? That would certainly be scary enough but it gets worse.

What if that letter also stated: “A determination of incompetency will prohibit you from purchasing, possessing, receiving, or transporting a firearm or ammunition. If you knowingly violate any of these prohibitions, you may be fined, imprisoned, or both pursuant to the Brady Handgun Violence Prevention Act, Pub.L.No. 103-159, as implemented at 18, United States Code 924(a)(2).”?

That makes is sound like something right from a documentary on a tyrannical dictatorship somewhere in the world. Yet, as I write this I have a copy of such a letter right in front of me. It is being sent by the U.S. Department of Veterans Affairs to hundreds, perhaps thousands, of America’s heroes. In my capacity as Executive Director of the United States Justice Foundation (USJF) I have been contacted by some of these veterans and the stories I am getting are appalling.

Tens of thousands of Iraq and Afghanistan veterans with less-than-honorable discharges, many with physical and mental injuries, were being denied care by the Department of Veterans Affairs, claims a new report by a veterans’ advocacy group.

“The VA created much broader exclusion criteria than Congress provided, failing to give veterans due credit for their service to our country,” said the report by advocacy group Swords to Plowshares, published on Wednesday. 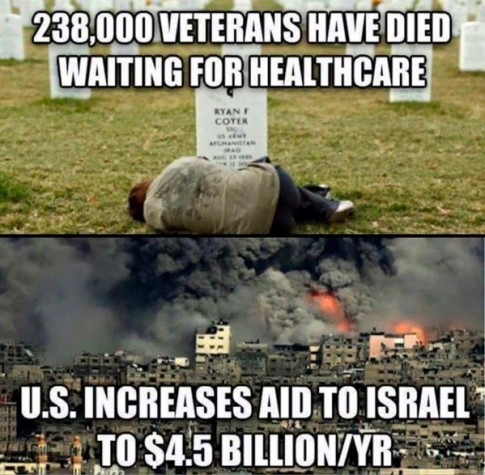 A leaked document shows nearly one-third of the 847,000 veterans in the Department of Veteran Affairs’ backlog died while waiting for treatment, amounting to more than 238,000 patients, according to documents obtained by the Huffington Post.

The VA maintains that the number is so large because it has no mechanism to purge the list of dead applicants, and that some of the veterans may have died years ago. VA spokeswoman Walinda West told the Huffington Post that some people on the list may never have completed an application, or could be using other insurance. 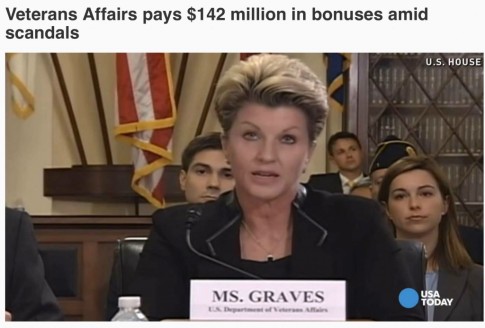 The Department of Veterans Affairs doled out more than $142 million in bonuses to executives and employees for performance in 2014 even as scandals over veterans’ health care and other issues racked the agency.

The agency paid more than $380,000 in 2013 performance bonuses to top officials at hospitals where veterans faced long delays in receiving treatment, including those under investigation for wait-time manipulation.

In Tomah, Wis., the former chief of staff of the VA medical center there, Dr. David Houlihan — whom veterans nicknamed the “Candy Man” because of his prolific prescribing of narcotics — received a $4,000 bonus in December. That was nine months after an inspector general investigation report concluded he was prescribing alarmingly high amounts of opiates. And it was four months after Marine Corps veteran Jason Simcakoski, 35, died of “mixed-drug toxicity” as an inpatient at Tomah after he was prescribed a fatal cocktail of medications, including opiates. The inpatient pharmacist supervisor also received a $1,050 bonus in December. A spokesman for the Tomah VA declined to comment. The VA moved last month to fire Houlihan. A lawyer who represented him did not respond to a message Tuesday seeking comment.

In Augusta, Ga., VA financial manager Jed Fillingim was awarded a $900 performance bonus. He drew scrutiny from Congress last year after news reports revealed he admitted drinking and driving a government truck to a VA meeting in 2010 and a co-worker fell from the truck and was killed.

For several months in 2014, one of the biggest stories in America revolved around revelations of incompetence and death at the Department of Veterans Affairs (VA). Specifically, an internal VA investigation admitted at least 23 veterans died while waiting for care, and that 120,000 were being affected by delinquent care. The FBI subsequently launched a criminal probe into the VA, and here’s what the White House had to say about the entire affair:

WASHINGTON — More than 238,000 of the 847,000 veterans with pending applications for health care through the Department of Veterans Affairs have already died, according to an internal VA document provided to The Huffington Post.

Flip to page 13 and you’ll see some stark numbers. As of April, there were 847,822 veterans listed as pending for enrollment in VA health care. Of those, 238,657 are now deceased, meaning they died after they applied for, but never got, health care.