“However, increased understanding of gender dysphoria and surgical techniques in this area have improved significantly, and surgical procedures are now widely accepted in the medical community as medically necessary treatment for gender dysphoria,” the VA wrote in the notice.
The department called it a serious medical condition with severe consequences for patients if treatment is not provided. Current VA rules prohibit the department from covering or performing any surgical procedures considered to be gender alterations.

In February, the Defense Department proposed adding non-surgical hormone therapy for gender dysphoria into the military’s Tricare insurance coverage. The chairman of the House Armed Services Committee shot back at the time, urging that the military not be an “experimental laboratory for social issues.”

The changes could be laying the groundwork for the Pentagon’s plan to allow transgender troops to serve openly. Defense Secretary Ash Carter set a deadline earlier this year for studying the issue but a final directive lifting the prohibition has not yet come.

The VA’s proposal was lauded by the American Military Partner Association, which describes itself as the nation’s largest organization of lesbian, gay, bisexual and transgender military families.

“So many veterans rely on the VA for important medical care that they have earned serving our nation, including transgender veterans,” AMPA president Ashley Broadway-Mack said in a statement. “Gender confirmation surgery is often a critically important and medically necessary treatment for transgender veterans, and lifting this ban is long overdue.”

Advocates estimate there could be as many as 15,000 transgender servicemembers, and the number could be much higher among the millions of veterans who use the VA…

…like Christopher Beck, who served as a SEAL before transitioning to Kristin Beck. 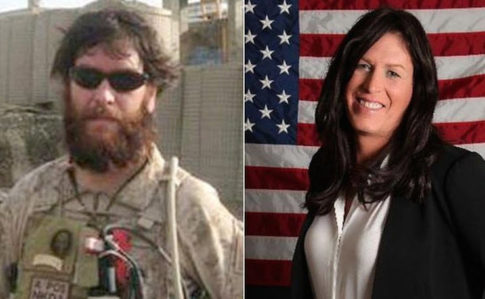 Are you going to argue with him her?

As Under The Radar reports, Secretary of Defense Ashton Carter has declared that transgender men and women “are being hurt by an outdated, confusing, inconsistent approach that’s contrary to our value of service and individual merit.” He’s ordered a six-month study that will most likely provide a roadmap for integrating transgender troops into military service.

A study by the Williams Institute at the UCLA School of Law suggests that 150,000 transgender men and women have served in the U.S. military, with approximately 15,500 of them still in uniform. At least 18 other countries have already integrated transgender troops into their militaries.