Shortly after Starbucks CEO Howard Schultz penned a letter in which he promised to hire 10,000 refugees over the next five years in the aftermath of Trump’s immigration executive order, a veteran-run coffee company has issued a rejoinder to Starbucks, promising to hire 10,000 veterans itself according to Fox News.

Black Rifle Coffee Company, or BRCC, which describes itself as a “premium small-batch, roast to order, veteran owned and operated coffee company” responded to Starbucks – or “Hipsterbucks” as they call the global coffee chain – announcing a pledge via Instagram to hire 10,000 veterans. This is what CEO Evan Hafer tweeted on Wednesday.

The company’s announcement was greeted on Twitter, especially by those who viewed Starbucks’ announcement as hypocritical:

Black Rifle Coffee Company is Veteran Owned and Operated. Give them your support and tell Starbucks to Suck it! pic.twitter.com/0xXDOokB40

Amen. Where can you purchase the Black Rifle Company coffee? https://t.co/3HZnLj5eOk

In a blog post the company wrote “We want to shift the conversation away from foreign policy to domestic issues that hit closer to home.” CEO Hafer also said that “we need to keep in mind that the four things we care about at BRCC are Family, Business, Veterans and country. And when we say “country”, the taxpayers. Everyone else can take a hike.”

Some more from the angry blog response:

Recently The CEO of Starbucks issued a statement that they vow to hire up to 10k immigrants in a span of 5 years, in the wake of President Trump’s executive order. Once you read between the lines, regardless of the words coming out of the CEO’s blow hole; the fact is that Hipsterbucks is chicken shit of backlash. They do not want their bottom line numbers effected since they are in 75 different countries. Hipsterbucks say they have a “heavy heart” and that they “support building bridges, not walls” with countries like Mexico. The CEO further went on to talk about how Hipsterbucks will not “Stand by or stand silent” and stated that with Trumps order “we” are sounding an “alarm” to Starbucks that civility and human rights are being taken for granted…is Starbucks so narcissistic to think that they are somehow an authority that people other than their hipster customer base will actually sound an alarm?! Let’s be honest, Hipsterbucks brews burnt, bullshit coffee and they add a bunch of sugar, foam, cream and sprinkle a side of other bullshit on the top to mask the taste of SHIT. Mixed into each cup comes a convoluted ingredient of anti-American and anti-constitutionalism fluff that has seemed to further the entitlement of the millennial generation. 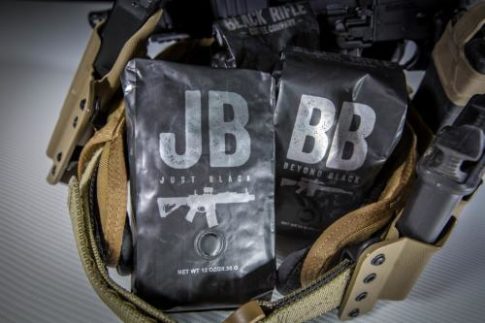 Before you jump on the bandwagon of main stream media and Hipsterbucks. Do a little homework, and read the executive order in its entirety. The United States was once a nation of immigrants, but let that shit go…after a couple generations, we are Americans…PERIOD. It is time after 3 presidencies that we start protecting ourselves. This is NOT a Muslim ban…it’s a ban on people coming from terrorist clad countries that happen to be predominately Muslim, and coincidentally we have found ourselves immersed into a war, fighting terrorists who (for all intent and purpose) harbor their ideals upon their interpretation of what their holy Quran says. Make no mistake; we do not advocate the violence against peaceful Muslims. Many of us have fought next to them, it is time we sit back and put more effort into our vetting programs for people who hail from harboring nations. We are going to leave you with this; Black Rifle Coffee has [always] vowed to hire Veterans and Patriots, we didn’t adopt this vow on the heels of anything to drive a bullshit touchy feely false sales projection!

This isn’t the first time BRCC has taken a jab at Starbucks. In a company blog post published on Jan. 31, writer Scott Lambin said, “They do not want their bottom line numbers affected since they are in 75 different countries. Hipsterbucks say they have a “heavy heart” and that they “support building bridges, not walls” with countries like Mexico.”

This is how CEO Hafer describes the history of his coffee company:

I started Black Rifle Coffee Company to provide a high-quality, roast-to-order, coffee to the pro 2A and veteran communities.  Between deployments to Iraq and Afghanistan, I was working to refine both my coffee roasting skills and my firearms skills.  I have spent over a decade researching coffee, refining my roast profiles and (of course) drinking what I roast.  Black Rifle Coffee is quite literally the combination of my two favorite passions.  I take pride in the coffee we roast, the veterans we employ and the causes we support.

As Fox News adds, BRCC has yet to specificy a timeline for its veteran hiring plan but is trying to make the process as easy as possible by posting its direct careers’ email address to Instagram.