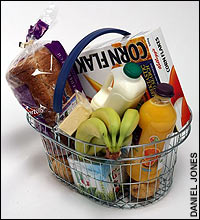 “The government suspended all diving operations to recover bodies inside the vessel and banned fishing around the island on Friday after it was revealed the ferry was carrying a highly toxic pesticide.”

ILOILO CITY, Philippines – A “food shortage” looms in the next one to two months after massive floods due to typhoon “Frank” (international codename: Fengshen) devastated farm lands and livestock in the Western Visayas, President Gloria Macapagal-Arroyo’s adviser for the region said Sunday.

“We may face a food shortage, that is the extent of the damage from the typhoon,” Presidential Adviser on the Western Visayas Raul Bañas told reporters here after he received a delivery of relief supplies from Armed Forces Chief of Staff General Alexander Yano.

“In our aerial sorties, we saw firsthand how grave the damage is to crops. I think that’s one of the major problems we are facing,” he said.

Bañas said one of the affected provinces, Iloilo, is one of the top three rice-producing provinces in the country.

He said the floods destroyed 22 hectares or rice lands, equivalent to 66,000 metric tons of rice, and “almost wiped out” livestock and fisheries in the region.

In Cadiz town in Negros Occidental, Bañas said the storm destroyed half a billion pesos worth of fishing boats.

Bañas appealed for donations of potable water, saying the water systems destroyed by the storm have not been repaired.

Supermarket chains have begun rationing rice as the effects of rising prices and disruptions to supply spill over from specialist grocers and suppliers to larger stores.

Netto, the Danish-owned discount store, has been restricting sales of larger bags of rice to one per person in all stores in recent weeks across the UK.

Mike Hinchcliffe, marketing manager for Netto UK, said: “We’re temporarily limiting our larger 10 kg bags of rice to one per customer because, like most other UK supermarkets, we are having to manage and minimise the impact the global rice shortage is having on our suppliers.

“We are experiencing a high demand for rice and have introduced this measure across our 184 UK stores to ensure that all of our customers have a fair opportunity to make their regular rice purchases. Our smaller 1kg packs remain on free sale with no restrictions planned at this time.” It expects the restriction to continue “indefinitely”.