An ancient Syriac prophecy warns us that Europe is to be purified and punished by an invasion of Islamists preceding the Antichrist. #WW3 https://t.co/diwiCdFTfS

“Petrus Romanus: The Final Pope Is Here,” by authors Cris Putnam and Tom Horn, detailed the Malachy prophecy and predicted that the current Pope would abdicate for health reasons, paving the way for the final Pope.

To state it bluntly, Pope Francis is not merely a freedom-hating communist and traitor to the sacred blessing of liberty, he’s actually part of the Satanic takeover of the Catholic Church that has now led the organization down the path of self-destruction. 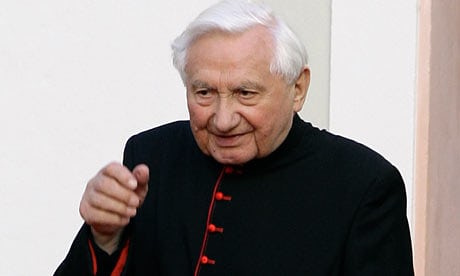 The flat belonged to the Vatican’s Congregation for the Doctrine of the Faith, which is in charge of tackling clerical sexual abuse.

When police showed up, they found drugs and a group of men engaged in sexual activity, local reports state.

Reports in Italy claim the occupant of the apartment is allegedly the secretary to Cardinal Francesco Coccopalmerio – a key aide to the 80-year-old Pope.

– Origins of the largest Catholic Church pedophile bust in History

Unable to settle lawsuits for victims of pedophile priests

A Montana Roman Catholic diocese has filed for bankruptcy following a court ruling finding the church guilty in over 400 cases of child sex abuse.
Church officials confirmed that the Diocese of Great Falls-Billings is unable to settle the lawsuits that have been so far been filed by 72 of the victims of pedophilia at the hands of Catholic priests.

This is the second diocese in Montana to file for bankruptcy over child abuse lawsuits in less than three years, with the total number of cases of sex abuse by priests, nuns and church volunteers reaching a staggering 760 victims since 2014 in Montana alone, with payouts from lawsuits in the tens of millions.

The Vatican’s finance chief, Australia’s highest ranking Roman Catholic and one of Pope Francis’ most senior advisors, Cardinal George Pell, has been charged with multiple sex offenses by Australian police in the latest blow to the Vatican’s attempts to put decades of child sex abuse scandals behind it.

“Cardinal Pell is facing multiple charges in respect of historic sexual offenses,” Victoria state police deputy commissioner Shane Patton said, following a police investigation that followed the same processes and procedures applied in other sex abuse cases. Cardinal Pell has been summoned to appear in court in Melbourne on July 18 to face the charges, which relate to complaints made by more than one person, according to the FT. To attend the hearing the 76-year-old would have to return to Australia from Rome, where he has been tasked by the Pope with cleaning up the Vatican’s finances.

Two of Europe’s greatest contemporary enemies recently got together to compare notes and discuss how they were going to further undermine and destabilize what remains of the Continent’s civilization.  Pope Francis and German Chancellor Angela Merkel met on June 17, in the Vatican’s Apostolic Palace to discuss the issues which will be raised at a Group of 20 summit meeting in Hamburg, from July 7-8.

The Vatican said that Frau Merkel and the Pope discussed the need “for the international community to combat poverty, hunger, terrorism and climate change.” Ms. Merkel, in an obvious swipe at US President Donald Trump, said that “we are a world in which we want to work multilaterally, a world in which we don’t want to build walls but bring down walls.”  The reference to “walls,” of course, was to President Trump’s promise to construct a wall on the Mexican-American border.  The pope, too, has been critical of Mr. Trump’s proposed plan.

– Pedophile Priest With HIV who Raped 30 Children Forgiven by Church:

A Catholic Priest has been acquitted by the church after he admitted to raping almost 30 young girls aged between 5 and 10-years-old.
The priest, Jose Garcia Ataulfo, was cleared of any wrong-doing and won’t face any criminal charges, despite the fact that he knew he was infected with HIV when he sexually abused all the children he admitted to raping.
The mother of one of the priest’s victims wrote a letter to The Pope asking to meet with him in Rome to discuss the case, but was shunned by the Vatican who declared that “the matter is closed”.

– D-Day for George Pell: Police must decide whether to charge cardinal over historic child sex charges:

Advice on historical sex abuse allegations against Cardinal George Pell has been sent to Victoria Police by the state’s Department of Public Prosecutions.

It must now be decided whether Australia’s most senior Catholic official will be charged over allegations of sexual abuse.

– The Catholic Church is punishing U.S. priests for speaking the truth about Islam and jihad:

Many bishops protected priests who were child molesters for years, transferring them from parish to parish and allowing them to prey upon new children rather than turning them over to police. In the Catholic Church today, protecting the image of Islam appears to be job one: you can be a cleric who speaks out against the Church’s official positions (such as those on contraception and female priests) and in many quarters of the Church you’ll be hailed as a hero. But the highly dubious proposition that Islam is a religion of peace has become a kind of superdogma that the U.S. bishops enforce with a stringency (and even ruthlessness) that they never display regarding actual Church teaching. You can reject every element of the Nicene Creed and everything the Church teaches, and still the U.S. Catholic Bishops will consider you a Catholic in good standing. But if you believe that Islam is not a religion of peace, you have no place in the U.S. Catholic Church.

Read moreThe Catholic Church is punishing U.S. priests for speaking the truth about Islam and Jihad

@EABucchianeri It'll be long before 2038. The Pope who is to flee Rome is said to be a look-a-like of Pius XII and flees in an old car. That's Francis! pic.twitter.com/A3riVJiOBX

“The large city with the high iron tower is on fire. But this has been done by the own people, not by those, which came from the east. And I can exactly see that the city is made equal to the ground. And in Italy it is going wildly too. They kill many people there and the Pope flees, but many clergymen will be killed, many churches collapse. ”

“When will dumb redneck catholic idiots wake up to the cruel facts about their brainwashing and the barbarity of their religious leaders?
This is the second Irish issue. The first was a water tank full of babies’ bones.
Yet the Irish still follow the faith robotically.”

– Pope cuts penalties for paedophile priests – including one let off with just a lifetime of prayer for abusing five young boys:

Pope Francis has been slammed by church officials and sex abuse survivors for cutting penalties for paedophile priests.

The Pope is said to be applying his vision of a ‘merciful church’ to sex offenders by reducing punishments to weaker sentences, such as a lifetime of prayer and penance.

It has been revealed by church officials that Pope Francis overruled advice given to him by the Vatican Congregation for the Doctrine of the Faith about two priests  – allowing them to be punished by a lifetime of prayer.

Read morePope Francis Cuts Penalties For Paedophile Priests – Incl. One Let Off With Just A Lifetime Of Prayer For Abusing 5 Young Boys

– Catholic Newsletter Uses Title of My Book Without Permission

Inch by inch it is a cinch.  Incrementalism is how the globalists get things done and child-sex-trafficking is not any different.

Don’t forget that Soros once gave $2 million to NAMBLA, the organization seeking to legalize pedophilia.

Australian churches, charitable organisations and schools may have to pay the majority of $4.3 billion worth of compensation to victims of child sexual abuse.

– Royal commission: $4.3 billion is cost of redress to victims of child sex abuse