– Steve Bannon Is Stepping Down From Breitbart

– Furious Trump Snubs Bannon Olive Branch: You’re With Him Or With Me

– Bannon Apologizes: “Donald Trump Jr. Is A Patriot And A Good Man”:

With President Trump lashing out via twitter again this morning at the “Fake Book” – referring, obviously, to Michael Wolff’s “Fire And Fury” – as he departed Camp David, the news coverage of the book’s contents is set to continue into its second week.

I’ve had to put up with the Fake News from the first day I announced that I would be running for President. Now I have to put up with a Fake Book, written by a totally discredited author. Ronald Reagan had the same problem and handled it well. So will I!

And as the president works the phones, demanding that his political allies help him bury “Sloppy Steve” in retaliation for his former chief strategist’s disloyalty, Bannon is now desperately trying to get back in the president’s good graces.

In recent days, The New York Times  and the Wall Street Journal have run stories about Bannon’s political allies and patrons distancing themselves from the Breitbart executive and former Trump campaign chairman. The billionaire Mercer family told the Times that it has retracted all financial backing for Bannon and that they’re weighing whether to fire Bannon from his role as executive chairman at Breitbart. They reportedly have stopped payment on his personal security detail.

“…Look at this guy’s past and watch what happens to him and Sloppy Steve!“ 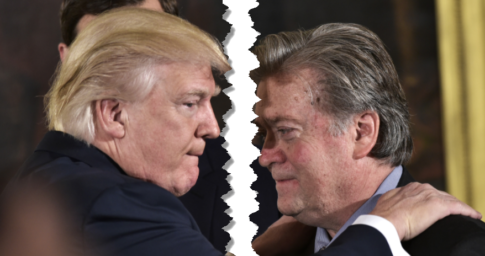 – Furious Trump Responds To “Pretender” Bannon: “He Has Lost His Mind”:

“When he was fired, he not only lost his job, he lost his mind…”

– Steve Bannon to Speak at Zionist Organization of America Dinner: ‘No Better Friend’ to ‘the Jewish State of Israel’:

Read moreSteve Bannon to Speak at Zionist Organization of America Dinner: ‘No Better Friend’ to ‘the Jewish State of Israel’