According to a TIME magazine profile on Donald Trump’s right-hand man, Steve Bannon has an obsession with the book “The Fourth Turning: What Cycles of History Tell Us About America’s Next Rendezvous with Destiny.”

Business Insider called the fascination concerning. It outlines that every 80 to 100 years, the world cycles through a cataclysmic event that upsets the “old ways” of doing things and brings in a new one “in a trial of fire.”

The book claims that the last two Americans experienced were during the Civil War and the Reconstruction, and then the Great Depression and World War II. It could easily be argued that 9/11 upset the “old way” the United States did things, not merely in government but in travel and the way Americans live their daily lives. However, Bannon, like authors William Strauss and Neil Howe, believe we’re in another “Fourth Turning” currently.

– How Steve Bannon Rose To The Top Of Trump’s Power Structure:

On Saturday night, President Trump signed an executive order promoting Chief Strategist Steve Bannon to the “principals committee” of the National Security Council — while, according to the New York Times, downgrading the roles of the chairman of the Joint Chiefs of Staff and the director of national intelligence, who will now attend only when the council is considering issues in their direct areas of responsibilities.  The move puts Bannon, a former Navy surface warfare officer, admiral’s aide, investment banker and media executive, on the same level as Trump’s national security adviser, Michael Flynn.

The rapid rise of Bannon has come as a shock to many political pundits even though he played a key role throughout Trump’s campaign and is thought to be the key architect behind several of the recent executive orders signed by the new administration as well as Trump’s fiery inaugural address.  In an interview last week attacking the media, Bannon clearly demonstrated the brash attitude that likely ingratiated him with the President and secured him a top spot in the Trump White House.

Steve Bannon holds a master’s degree in National Security Studies from Georgetown University (CIA asset?), worked at Goldman Sachs and has been an executive producer in Hollywood.

Today, the Hillary Clinton campaign has decided to name-call and character assassinate Breitbart News Network and its 31+ million monthly readers. They say that we are “anti-Semitic,” though our company was founded by Jews, is largely staffed by Jews, and has an entire section (Breitbart Jerusalem) dedicated to reporting on and defending the Jewish state of Israel.

A lot of people don’t realize this but Breitbart News Network really got its start in Jerusalem. It was the summer of 2007, and Andrew had been invited to tour Israel as part of a media junket. I agreed to tag along as his lawyer and best friend. What neither of us knew at the time was that the trip would change our lives and give us the inspiration for Breitbart News Network.

– Bannon Declares War On The Media: “You Are The Opposition; Keep Your Mouth Shut”:

Not one to mince words, Steve Bannon, Trump’s Chief White House strategist, eviscerated the mainstream media during an interview last night.  Commenting on their coverage of the Trump campaign, Bannon lambasted the disconnect of the media from everyday Americans saying, “They don’t understand this country. They still do not understand why Donald Trump is the president of the United States.”  Per Axios:

“The media should be embarrassed and humiliated and keep its mouth shut and just listen for awhile,” Mr. Bannon said during a telephone call. “I want you to quote this,” Mr. Bannon added. “The media here is the opposition party. They don’t understand this country. They still do not understand why Donald Trump is the president of the United States.”

“The elite media got it dead wrong, 100 percent dead wrong,” Mr. Bannon said of the election, calling it “a humiliating defeat that they will never wash away, that will always be there.” 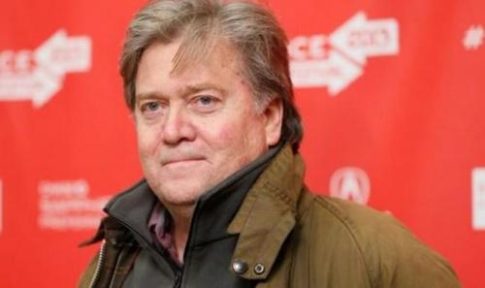 But that attacks didn’t end there as Bannon went on describe the media as “the opposition party.”

Read moreBannon Declares War On The Media: “You Are The Opposition; Keep Your Mouth Shut”