If people trust the US government and the Federal Reserve, then they are doomed and they deserve it, because they haven’t done they research.

Why would you trust somebody that has been caught lying and stealing almost all of the time?

Why would you trust somebody that has brought down the value of the US dollar to 5 cents compared to 1913, when the Federal Reserve banksters took over?

Why would you trust somebody that has stolen essentially 95% of your money?

Why would you trust somebody that threatens with an economic meltdown if you would take a look into their books? 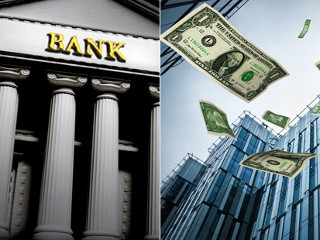 The chief watchdog for the government’s $700 billion bailout program says federal officials were trying to contain the worst financial crisis in decades last year with the Troubled Asset Relief Program, but they had concerns about the bank institutions’ financial health. (ABC News Photo Illustration)

The Treasury Department and the Federal Reserve lied to the American public last fall when they said that the first nine banks to receive government bailout funds were healthy, a government watchdog states in a new report released today.

Neil Barofsky, the special inspector general for the Troubled Asset Relief Program (SIGTARP), says that despite multiple statements on Oct. 14 of last year that these nine banks were healthy and only receiving government funds for the good of the country’s economy, federal officials knew otherwise.

“Contemporaneous reports and officials’ statements to SIGTARP during this audit indicate that there were concerns about the health of several of the nine institutions at that time and, as detailed in this report, that their overall selection was far more a result of the officials’ belief in their importance to a system that was viewed as being vulnerable to collapse than concerns about their individual health and viability,” Barofsky says.

Last October, the government was in the midst of trying to contain the worst financial crisis in decades. On Sept. 7, 2008, mortgage giants Fannie Mae and Freddie Mac were placed under conservatorship. On Sept. 15, the massive investment bank Lehman Brothers filed for bankruptcy. The next day, insurance giant AIG needed an $85 billion government loan to avoid collapse.

On Oct. 13, after Congress had passed the $700 billion financial bailout program earlier that month, Treasury provided capital injections for nine institutions that together held over $11 trillion in assets: Bank of America, Citigroup, Wells Fargo, JP Morgan Chase, Goldman Sachs, Morgan Stanley, Merrill Lynch, State Street and the Bank of New York Mellon. As of June 2008, these nine banks accounted for around 75 percent of all assets held by U.S. banks.

That same day, the Treasury Department, the Federal Reserve and the FDIC also released a joint statement reiterating that “these healthy institutions are taking these steps to strengthen their own positions and to enhance the overall performance of the US economy.”

Barofsky finds, however, senior officials at the Treasury and the Fed had serious concerns about the health of some of these banks. Fed chief Ben Bernanke, for one, told the watchdog that the central bank believed each of the nine institutions faced certain risks given the economic environment.

“Senior government officials had affirmative concerns at the time the nine institutions were selected about the health of at least some of those institutions,” Barofsky says. “The Federal Reserve had concerns over the financial condition of several of these institutions individually and for all of them collectively absent some governmental action. And former Secretary Paulson noted concerns about the outright failure of one of the institutions.”

Merrill Lynch, for example, had suffered several consecutive quarters of severe losses. One month earlier, Merrill had agreed to be acquired by Bank of America. Merrill’s situation was so dire, though, that later that winter Bank of America’s CEO Ken Lewis told the Fed and Treasury that he was considering pulling out of the deal due to Merrill’s substantial fourth-quarter losses. In the face of ensuing government pressure, Lewis and Bank of America eventually completed the deal and received an additional $25 billion in government aid.

Since last October, the bailout has generated widespread outrage. While supporters say it saved the system from collapse, detractors say it helped only Wall Street and not Main Street, since banks have not boosted lending and unemployment and foreclosures have risen.

Barofsky, who last month called it “highly unlikely” that taxpayers would recoup their full investment, says the government’s “inaccurate statements” last fall only made the program more controversial.

“In addition to the basic transparency concern that this inconsistency raises, by stating expressly that the ‘healthy’ institutions would be able to increase overall lending, Treasury may have created unrealistic expectations about the institutions’ condition and their ability to increase lending,” Barofsky says. “Treasury and the TARP program lost credibility when lending at those institutions did not in fact increase and when subsequent events — the further assistance needed by Citigroup and Bank of America being the most significant examples — demonstrated that at least some of those institutions were not in fact healthy.”

“The lesson is straightforward,” the watchdog advises. “Accuracy and transparency will enhance the credibility of Government programs like TARP and restore taxpayer confidence in the policy makers who manage them; inaccurate statements, on the other hand, could have unintended long-term consequences that could damage the trust that the American people have in their Government.”

In a letter to Barofsky, the Fed’s General Counsel agreed with the report’s findings, noting that “an important lesson illustrated by the events that shocked the financial systems over the past two years is that transparency and effective communication are important to restoring and maintaining public confidence, especially during a financial crisis.”

However, Treasury’s Office of Financial Stability did not explicitly agree with the watchdog’s report. While Treasury called the report “a useful contribution,” they also told Barofsky, “While people may differ today on how the contemporaneous announcements about the reasons for selecting the initial nine recipients should have been phrased, any review of such announcement must be considered in light of the unprecedented circumstances in which they were made.”