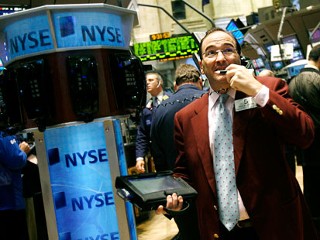 Nov. 20 (Bloomberg) — U.S. stocks slid and the Standard & Poor’s 500 Index plunged to its lowest level in 11 years after economic reports depicted a deepening recession and lawmakers postponed a vote on a plan to salvage the auto industry.

The Standard & Poor’s 500 Index extended its 2008 tumble to 49 percent, poised for the worst annual decline in its 80-year history. Chesapeake Energy Corp. and National-Oilwell Varco Inc. slid more than 21 percent after oil sank to a three-year low as the slumping economy crushes demand. JPMorgan Chase & Co. lost 18 percent and Citigroup Inc. plunged 26 percent as concern the recession will trigger more bankruptcies pushed the cost of insurance against corporate defaults to an all-time high.

“We’re just trying to stay away from the window,” said James Paulsen, who helps oversee about $220 billion as chief investment strategist at Wells Capital Management Inc. in Minneapolis. “This isn’t about fundamentals, it’s not about bad balance sheets, it’s about fear and confidence.”

The S&P 500 extended its plunge from an October 2007 record to almost 52 percent in the worst bear market since the Great Depression. Concern the recession is worsening was spurred after jobless claims approached the highest level since 1982, the index of leading economic indicators fell for a third time in four months and the Federal Reserve said manufacturing in the Philadelphia area shrank at the fastest pace in 18 years.

Seventeen companies in the S&P 500 lost more than one-fifth of their market value today, as all 10 of the index’s main industry groups slid at least 3.5 percent.

More than 2.2 billion shares changed hands on the floor of the NYSE, its busiest trading session since Oct. 10.

To contact the reporter on this story: Eric Martin in New York at emartin21@bloomberg.net.