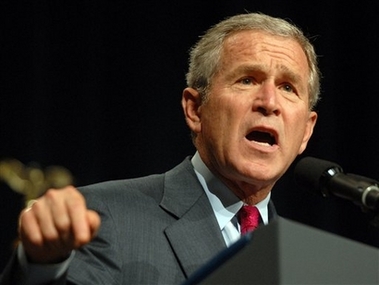 So if the President thinks he needs to order children’s penises to be put in vices, there is no law that can stop him and after last night’s vote, the Senate and Congress, exemplified by sicko 16-year-old boy groomer Mark Foley (R-FL), has graciously provided Bush its full support for kids around the world to be molested in the name of stopping terror.

Yoo’s comments were made before the passage of the torture legislation last night. Up until that point Bush had merely cited his role as dictator-in-chief as carte-blanche excuse for ordering torture – now his regime have the audacity to openly put it in writing – going one step further than even the Nazis did.

Again, for those who are still deluded into thinking the extent of the “pressure” is loud music and cold water being thrown over Johnny Jihad in Ragheadistan, consider for a moment the fact that your own Congress and President who, according to the Constitution, are mandated to serve you, have just legalized abducting your kids from your home and electric shocking their genitals.

Now that the criminals have declared themselves outside of the law does that mean we’ll see Bush barbecuing babies on the White House lawn? Of course not, but the policy of torturing children in front of their parents has already been signed off on by the Pentagon and enacted under the Copper Green program and it happened at Abu Ghraib.

Women who were arrested with their children were forced to watch their boys being sodomized with chemical glow sticks as the cameras rolled. Investigative journalist Seymour Hersh says that the U.S. government is still withholding the tapes because of the horror of the “soundtrack of the shrieking boys” and their mothers begging to be killed in favor of seeing their children raped and tortured.

Your government has just lobbied for and Congress has passed legislation to discard the Geneva Conventions and mandate all this.

Pedophiles nationwide should rejoice – they can comfortably take a stroll down to the local swimming pool, grab whoever they like, drag them home, rape and torture them, and then in their defense cite the U.S. government as an example of how one should conduct themselves.

The bill also retroactively gives Bush, the Neo-Cons or any of their henchmen immunity from war crimes charges dating back to September 11. Ask yourself why they would be so careful to protect themselves from accusations of war crimes.

Could that possibly be because they are knowingly committing war crimes?

The legislating of torture itself should be a criminal act. All laws that contradict the U.S. Constitution are null and void. It was once a law that black people were slaves.

Only by engaging in civil disobedience and refusing to tolerate or acknowledge the laws of a criminal regime that has greased the skids for sexually torturing kids can we ever have a hope of returning America to its past glory.