Comedian Armando Iannucci got past security guards at the US State department in Washington with a pass which “could have been produced by a child”, in what he described as “probably international espionage”. 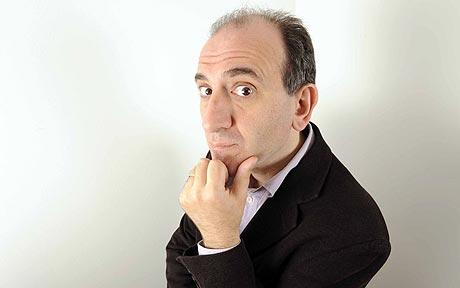 The identification he had with him was an amateurish BBC pass with his face show by a print out of a picture of him from the internet Photo: PAUL GROVER

Mr Iannucci was researching his latest film, the US-British political drama ‘In the Loop’, when he visited the department’s headquarters in the Foggy Bottom neighbourhood of the US political capital.

The identification he had with him was an amateurish BBC pass with his face show by a print out of a picture of him from the internet.

He flashed the card at the guards in the main reception of the building, said he had an appointment and was waved through.

The comedian then spent an hour walking around the building taking photographs, which were later used to help with the set designs for the film.

The writer, who also created political satire-cum-farce The Thick Of It for BBC4, said: “I had a terrible, amateur BBC identity pass, with basically my face printed off Google and my name under it.

“A child could have produced it in 20 seconds. I wandered up to the front reception of the State department and said ‘BBC. I’m here for the 12. 30.’

Read moreComedian got past security guards into US State department

The State Department has lost track of as many as 400 laptop computers, an internal audit ordered by the Inspector General has found.

“The importance of safeguarding official laptops and office equipment containing sensitive information is not a new concern,” said State Department overseer Rep. Nita M. Lowey (D-NY) through a spokesperson to CQ Politics. “I intend to review the facts about this situation.”

The computers belong to the Anti-Terrorism Assistance Program, run by the Bureau of Diplomatic Security, which protects diplomats during stateside visits and trains and equips foreign police, intelligence and security forces. Anonymous sources say that officials are “urgently” scouring offices in the Washington, D.C. area to account for the equipment.

The State Department is not keeping good records of its inventory, official John Streufert told a panel at a February 6 meeting on the security of “personal identification information,” citing a “significant deficiency.” Mark Duda, the Inspector General’s representative, also warned of scandal like the one that erupted in May of 2006, after the home of a Veterans Administration employee was burglarized and a laptop he was using for a work project, containing names, Social Security numbers and birthdates of more than 26 million people, was taken.

“It’s the worst flaw you can have in management control,” said a “close observer.”

Representative Duncan Hunter, the ranking Republican on the House Armed Services Committee, suggested that the military was being saddled with additional responsibilities because the State Department has been sluggish in responding to new needs. Hunter said “the need to train and equip foreign forces and to provide stabilization programs will remain necessary as we continue to fight the global war on terror.”

The Pentagon asked Congress Tuesday to give it permanent authority over training and equipping foreign militaries, in a shifting of roles from the State Department.

Both Defense Secretary Robert Gates and Secretary of State Condoleezza Rice sought Congressional approval for the change, as well as authorization for the Pentagon to spend 750 million dollars in 2009 in helping foreign militaries.

Gates told members of the House Armed Services Committee the foreign military assistance program is “a vital and enduring military requirement, irrespective of the capacity of other departments, and its authorities and funding mechanisms should reflect that reality.”

Some lawmakers said it raised questions about the military’s growing role in domains traditionally reserved for diplomats.