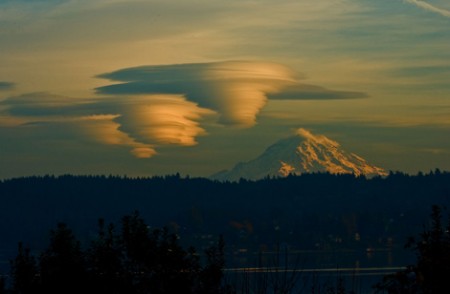 Mount St. Helens, Mount Rainier and Mount Hood are all major volcanoes that lie along the infamous “Ring of Fire” that runs down the west coast of the United States, and all of the seismic activity that has been taking place in the region has many concerned about what may happen next.  Earlier this month, I wrote about how 45 earthquakes of magnitude 2.5 or greater hit Alaska in just one 24 hour period.  This week, it is volcanic activity that is raising concerns.  The earthquake swarms at Mount St. Helens are making headlines all over the globe, and on Tuesday two major volcanoes in Alaska suddenly erupted on the exact same day…

“The magma reservoir beneath Mount St. Helens has been slowly re-pressurizing since 2008,” the U.S. Geological Survey said in a statement on April 30, 2014. “It is likely that re-pressurization is caused by (the) arrival of a small amount of additional magma 4 to 8 km (2.5 to 5 miles) beneath the surface.”

The USGS said this is to be expected with an active volcano and does not indicate “the volcano is likely to erupt anytime soon.”

When Mount St. Helens, a volcano in Washington State, erupted on May 18, 1980, it crushed entire forests and altered local river systems.

What this article doesn’t mention

What this article doesn’t mention, is that that eruption also melted the glaciers at the top of the mountain sending a deadly slurry of ice, mud, huge trees, bulldozers, and anything else in the way, in a mad rush down the Toutle River.

At the time of the 1980 eruption, 11 named glaciers radiated down the flanks of the volcano along with two small unnamed glaciers and numerous perennial snowfields, according to the USGS. The largest glaciers extended about 2.5 (1.5 mi) from the ice-filled summit crater. The cataclysmic landslide and eruption removed about 70% of the glacier mass.