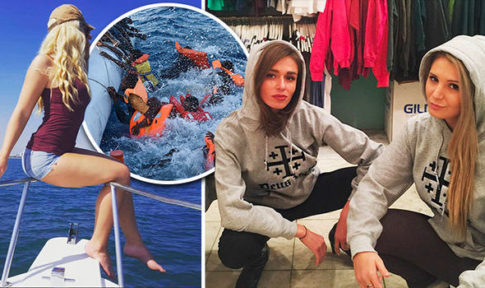 Sea rescue? Nonsense, it is clearly a ferry service, and new material for the aid organizations, which pull the money out of the pockets.

– Thousands of Migrants from Libya on Course for Europe:

TRIPOLI (AFP) – At least 20 boats carrying thousands of migrants on their way to Italy were spotted on Friday off the coast of the western city of Sabratha, the Libyan navy said.

“Large rescue and interception operations are under way” with the help of the Libyan coastguard, fishing and commercial boats and in coordination with the Italian authorities, navy spokesman General Ayoub Qassem said.

“Today is the day of a massive exodus of illegal migrants toward Europe,” he added, without elaborating.

Read moreThousands of Migrants from Libya on Course for Europe

– GADDAFI PREDICTED AND TRIED TO STOP THIS TERROR WAVE IN UK, SO THE US MURDERED HIM:

Outspoken critic of Big Government and former U.S. presidential candidate, Dr. Ron Paul, blasted the West for ignoring admonishments from deposed, late, Libyan leader, Muammar Gaddafi, who asserted prior to his death, the rise of U.S.-supported Islamic extremists would lead to attacks on Europe…