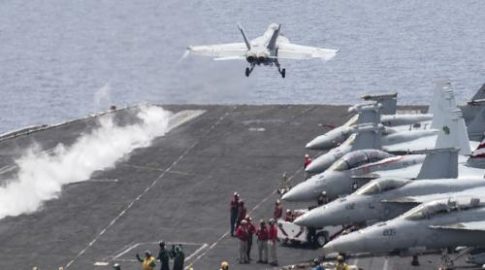 – US Launches Air Strikes Against ISIS Targets In LIbya:

In what comes as the most expected geopolitical development in recent years, moments ago the United States announced that it had launched multiple airstrikes against Islamic State militants in Libya on Monday, opening a new, more persistent front against the group at the request of the United Nations-backed government, Libyan and U.S. officials said.

The strikes, which allegedly targeted an Islamic State tank and vehicles, come amid growing concerns about the group’s increased threat to Europe and its ability to inspire attacks across the region. “The presidency council, as the general army commander, has made a request for direct U.S. support to carry out specific airstrikes,” Serraj said. “The first strikes started today in positions in Sirte, causing major casualties.”

As AP reports, the strikes mark the start of a more intense American role in the fight against IS in Libya, as the U.S. steps in to assist the fragile, U.N.-backed government there. Of course, the government is fragile only because of US involvement 5 years ago (thanks Hillary) to topple Muammar Gadaffi and unleash the political chaos that led to the Arab spring in, according to some, unleashed jihadist organizations such as ISIS.  They were the first strikes by the U.S. on the group in Libya since February.

In a statement, Pentagon press secretary Peter Cook said President Barack Obama authorized the strikes following a recommendation from Defense Secretary Ash Carter and Gen. Joseph Dunford, chairman of the Joint Chiefs of Staff. To be sure, there was no formal authorization: this is merely the latest unilaterally-decided US attack on a sovereign.  “They are consistent with our approach to combating ISIL by working with capable and motivated local forces,” said Cook, adding that “additional U.S. strikes will continue to target ISIL in Sirte.”

Cited by AP, Fayez Serraj, the head of the U.N.-brokered presidency council, said in a televised statement that American warplanes attacked the IS bastion of Sirte on the Mediterranean in northern Libya.

“The presidency council, as the general army commander, has made a request for direct US support to carry out specific airstrikes,” Fayez Serraj, the head of the Libyan presidency council, said in a televised statement broadcast on Monday afternoon. “The first strikes started today in positions in Sirte, causing major casualties.”

“No U.S. ground forces will be deployed,” he said.

Actually that is a lie, and furthermore, the reason why none of this is surprising is because as we reported back in May, the US was already in the process of sending troops and weapons to Libya to “Fight ISIS.” This is what we said:

Just two years after the US provided generous amounts of modern weapons to both the “moderate” Syrian rebels as well as the Iraq military, which then conveniently and almost immediately “fell into the wrong hands” and served to arm what was then a little known group of Muslim fundamentalists that went by the name of the Islamic State, the US is about to do it again.

Even more ironic is that there is an ongoing embargo to supply Libya with weapons, which however it about to be circumvented. As AP writes, “aiming at once to shore up the fragile government, and prevent Islamic State fighters and rival militias from further gains, the U.S., the four other permanent U.N. Security Council members and more than 15 other nations said they would approve exemptions to a United Nations arms embargo to allow military sales and aid to Libya’s so-called “Government of National Accord.”

The narrative is so worn out it can be seen from a mile away: “the step will boost the government’s efforts to consolidate power and regain control over Libyan state institutions like the central bank and national oil company.” As a reminder, this was the pretext used in virtually every failed US foreign intervention campaign. At least this time AP at least point out the obvious: the deployment of weapons “also comes with risks, not least of which is that the arms may be captured or otherwise taken by the Islamic State or other groups.”

And now that oil has tumbled below $40, the conclusion we left off with back then is just as appropriate:

The question then is what happens next? Our expectations is a rerun of the Syria fiasco, which will see a resurgent ISIS this time not in the middle east but operating in oil-rich and divided country of Libya, which in turn will unleash yet another refugee fiasco, which will impact Europe in the coming months. AP’s take is similar: “Worrying for Europe is the potential threat of a mass influx of refugees amassing in Libya, now that the earlier route from Turkey into Greece has been essentially shut down.” That may, however, change if tensions between Turkey and Germany are rekindled in the coming weeks.

Meanwhile, British Foreign Secretary David Hammond said his government had received a request from the Libyan government to bolster its Coast Guard — a project “which will address Libyan concerns about smuggling and insecurity on their border but will also address European concerns about illegal migration.”

In Libya, meanwhile, the U.N.-established presidency council on Monday effectively gave the go-ahead for 18 government ministers to start work, even though they have not received backing from  the parliament.  The council was created under a U.N.-brokered unity deal struck in December to reconcile Libya’s many political divisions. It won the support of a former powerbase in the country’s capital, Tripoli, but failed to secure a vote of confidence by the country’s internationally recognized parliament, based in Tobruk, a city in eastern Libya.

The real wild card, however, is who ends up controlling Syrian oil now that ISIS can no longer trade freely with Turkey, and more importantly, who will end up buying ISIS oil via Libya.

And with the “Syria war” now relaunched, only this time a few hundred miles to the west, we expect much of the same fallout to reemerge: a wave of Europe-bound refugees crossing the Mediterranean, mysterious offshore buyers of ISIS oil pumped in Syria, and even more geopolitical fallout as the superpower scramble for positioning in hopes of being the major puppet masters of whatever government emerges as a result of this latest US military intervention.