Bond prices in Venezuela have totally collapsed this morning – at 45c on the dollar, they are the lowest since 1998 – as the realization of the “abyss” they are staring into sparks an exodus from all credit positions in the country. VENZ 5Y CDS rallied 130bps which signals hedgers unwinding and the simultaneous sale of the underlying bonds implies broad-based capital flight (and profit taking) as 1Y CDS surges to record highs at 4830bps. 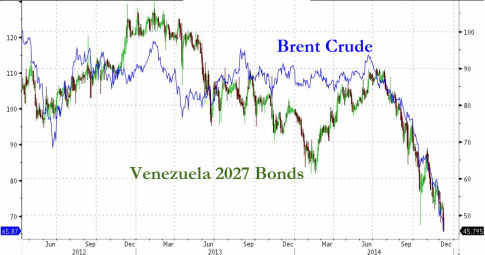 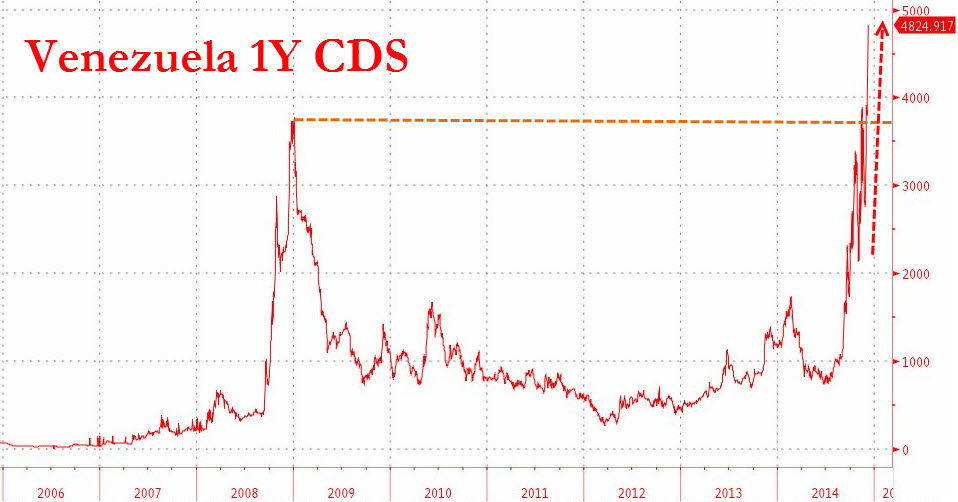 If you didn’t think this was serious, think again. (as Bloomberg reports)

The scores of money managers and analysts who crowded into Cleary Gottlieb Steen & Hamilton LLP’s panel discussion on Venezuela last week are a testament to the deepening concern over whether President Nicolas Maduro can make good on the nation’s debt obligations.

During the two-hour event on the 39th floor of the law firm’s downtown Manhattan office, some 150 attendees pressed the lawyers on an array of potential scenarios if Venezuela defaulted, according to interviews with six attendees who asked not to be identified because the meeting was private. Among the topics debated were whether the state oil company’s U.S. gasoline stations could be seized as collateral and whether it was legally possible for Venezuela to restructure the producer as an empty shell to avoid bondholder claims, they said.

For a country that hasn’t missed a foreign bond payment in decades, the questions reflect growing speculation the socialist revolution that transformed Venezuela over the past 15 years under Hugo Chavez and now Maduro has finally pushed the nation to the brink of economic collapse. After this year’s plummet in oil, which accounts for almost all of Venezuela’s exports, investors are now clamoring for insights from the law firm that represented Argentina in two defaults on how the government might defend itself when the money runs out.

Of course, Maduro is vehemnt that it’s not his fault…

Maduro said in a televised speech last night that ratings companies had imposed a “financial blockade” on Venezuela to prevent it from borrowing abroad, and that opposition politicians were to blame for the country’s economic woes.

“We have a financial blockade impeding us from getting financing we need to confront the fall in oil prices,” he said in Caracas. Venezuela has lower credit ratings “than countries at war or with Ebola. This has political causes.”

And it appears by the bond price plunge and modest CDS rally in 5Y suggests these various hedged VENZ bond holders did not like what they heard and unwound all their positions.

Which makes sense, as we concluded previously (read more here),

The punchline: “We are thus skeptical that the economic team’s plan to tap international lenders, including China, over coming weeks will yield any tangible results.”

What this means in simple terms is that Venezuela is now desperate for any cash. As CNBC’s Silvana Ordonez reports, citing Diego Moya-Ocampos, a senior political risk analyst at IHS, “Clearly the government is trying to send signs to the market that they are working on necessary adjustments that the economy needs in order to honor international commitments and keep up with social policies, which are essential for political stability. However, these policy adjustments are not enough. This reflects simply that the government is desperately looking for funds to compensate for the lost revenues from declining oil prices.”