Those who have been following the ridiculous moves in the Shanghai Composite in recent months, knew it was only a matter of time before yet another major stock market (one which recently surpassed the Nikkei for the second largest spot in the world) crashed violently, further eroding faith in the centrall-planned “price discovery” process. The only question was when.

Following our report last night about China’s change in collateral rules, in which we noted that none other than the PBOC was now eager to pop the equity bubble following the PBOC simultaneously fixing the CNY significantly stronger (implicit tightening) and enforced considerably stricter collateral rules on short-term loans/repos – a move which according to estimates from Shenyin Wanguo Securities, would disqualify some 1.25 trillion yuan in corporate bonds as repo collateral, or 60% of all outstanding corporate bonds listed on China’s two stock exchanges – we were not surprised to see the tumble in the market-traded Yuan (which crashed the most in 6 years), and the surge in interest rate swaps, coupled by the plunge in corporate bonds. The only thing that puzzled us was why, after the correct kneejerk reaction lower in the Shcomp, did stocks proceed to surge even higher. 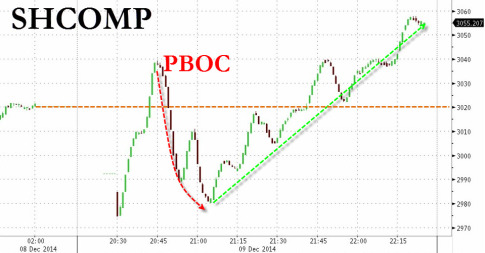 That said, we summarized it as follows:

We concluded as follows: “We will see what kind of fallout this creates but for now stocks are holding up as FX and bond markets are turmoiling.”

We didn’t have long to wait, because literally a few short hours after we wrote that sentence, this happened:

Because the higher they rise the quicker and more violently they plunge.  Here are the details via Bloomberg:

Ironically, and as has been the case throughout the western world, the crash in stocks promptly led to a capital reallocation, and all the earlier moves in other asset classes were quickly reversed as panicked speculators rushed out of stocks into everything else that had been sold off earlier:

That said, it is likely to get much worse before it gets better as the government will now be running and popping bubble after bubble until it extinguishes all the excess liquidity:

The liquidity crunch may have already taken place, with the FT reporting that Industrial and Commercial Bank of China, China Construction Bank, Bank of China have raised rates on time deposits to 20% above benchmark over past week. Why else would they be doing this if not to entice depositors to park their cash at just these banks. And how long before everyone else follows, and what happens to inflation then and the biggest bubble of all: housing, which as we have been reporting since the beginning of the year, is teetering on the verge of total collapse?

Here is a more detailed narrative of the Chinese crash from the WSJ:

The selloff started in the bond market, as traders rushed to sell and raise cash after a regulator banned investors from using low-grade corporate debt as collateral to borrow cash. The turmoil then spread to the yuan, which recorded its biggest two-day tumble ever. Later, the benchmark Shanghai index slumped 5.4% to record its biggest fall since 2009.

The sudden moves serve as a reminder to global investors about the country’s shaky finances, just as China opens up its capital markets more to overseas cash. Policy makers gathering in Beijing this week for a key summit are signaling to the investing public that they should prepare for a lengthy period of slower economic growth after years of amassing debt to fuel high growth levels.

The slump in the stock market was especially stark, though not entirely unexpected, after it had surged recently to become the world’s top performing index. Retail investors had fueled the rally, returning to stocks after once-popular investments, including high-yielding wealth management products and gold, turned sour.

“I was actually doing a presentation in my office during the last ten minutes of trading, when my boss asked to me to stop and asked everyone to look at stock prices. Then I saw the incredible fall of the Shanghai index and my stocks that have turned from black to red in just a few hours,” said Wu Yunfeng, a Shanghai-based retail investor.

And so another Meep Meep learns his lesson. If only this time it was for more than 15 minutes…