– PIMCO Liquidations Begin; And So Does The Retaliation: All Bill Gross Tweets Deleted (ZeroHedge, Sep 29, 2014):

The last few days have been hectic for PIMCO executives. As we already noted, expectations of outflows persist and today’s open in CDS markets suggested major concerns among market participants that PIMCO redemptions would force selling through an illiquid market. Sure enough, Bloomberg reports that PIMCO’s Total Return Fund ETF was behind the auction of more than $170m of Fannie Mae CMBS on Friday (and more BWICs were seen today). As one trader noted, “you’re going to sell your most liquid stuff first.” Additionally, PIMCO has seen fit to delete all Bill Gross’ tweets… so here are the last six months for the record.

As Bloomberg reports, the PIMCO liquidations have begun…

Pimco Total Return ETF behind auction of more than $170m of Fannie Mae CMBS on Friday, according to person with knowledge of the matter, who asked not to be named because the seller wasn’t disclosed.

List included most of ETF’s largest holdings in sector, according to Empirasign and Bloomberg data

Dealers also circulating ~$77m Fannie CMBS BWIC today with bonds in sizes similar to at least most of $3.6b ETF’s other holdings of the DUS securities, the data show

“You’re going to sell your most liquid stuff first. You don’t want to be a forced seller of anything. I would think these lists are going to be absorbed pretty well,” Brean Capital strategist Scott Buchta said in telephone interview 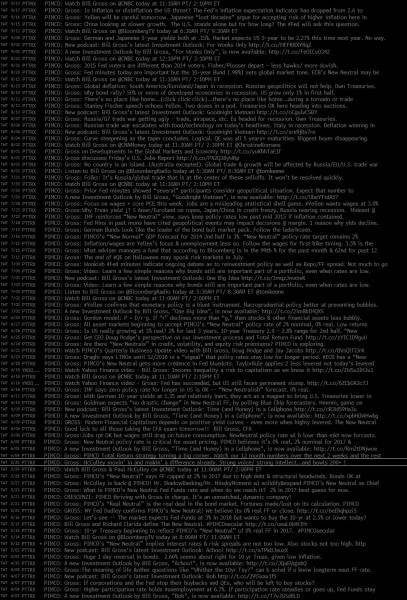 One wonders just what it is that PIMCO is so afraid of… are they about to take a 100% diametric market view to the ‘Bond King’ and need no evidence left of the entire company’s top-down market thesis? Or is it just standard practice?

1 thought on “PIMCO Liquidations Begin; And So Does The Retaliation: All Bill Gross Tweets Deleted”