China may be doing everything in its power to divert attention from the simple fact that its housing bubble, the largest in the world in terms of both assets comprising it as well as divergence from fair value, has burst. But while there is no clear threshold of what constitutes a bursting bubble when it comes to housing, the latest data out of Soufun, China’s largest real-estate website, which said that land sales have dropped a massive 22% to 1.7 trillion Yuan in 2014 so far, is likely as clear an indication as any that Beijing is about to panic.

And if that was not enough Bloomberg adds that land sales in 300 cites followed by Soufun fell almost 50% Y/Y to 415.9 billion yuan in 3Q, while residential land sales declined more than 50% to 265.3b yuan in 3Q.

So why, aside from the obvious, is this relevant? Because recall as we reported two weeks ago when looking at US household net worth, in the US it is all about (record) financial assets. So much so, in fact, that financial assets as a percentage of total household assets have never been higher at 70.3%, which also means that real estate as a percentage of total is as low as it has ever been.

Meanwhile, in China few households care as much about financial assets (the ones that do are largely a part of the Politburo or the ultra-rich oligrachy). Instead, the largest Chinese household asset is Real Estate, which at 74.7% of total household assets, is by far the most valuable asset that China’s population has. 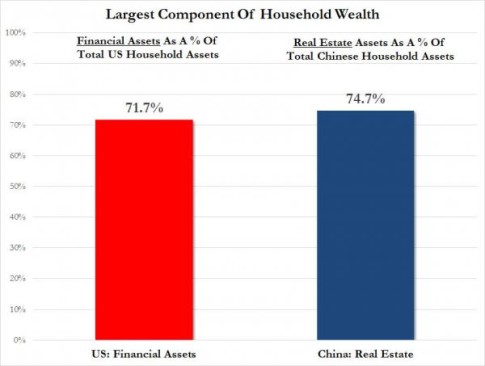 And once a few hundred million Chinese wake up and realize that the “wealth effect” portrayed by the blue bar above has been obliterated, the riots currently taking place in Hong Kong will be a gentle warm up for what the People’s Liberation (sic) Army will be about to face.