While CNN salivates over the news potential of an African-American teen being shot by a police officer, the network deliberately censors any news of the systematic medical abuse of African-American children by the CDC and the vaccine industry. That’s the startling revelation which has now surfaced from recent events.

Following the explosive story of a key CDC scientist and whistleblower going public with his admission that the CDC committed scientific fraud to bury the truth about MMR vaccines causing autism, CNN has twice censored citizen journalists who posted well-cited stories on CNN’s iReport website.

CNN has been aggressively monitoring its own website to commit content suppression actions as rapidly as possible, making sure any truthful reporting about the CDC, MMR vaccines and autism gets deleted as quickly as possible.

The first story posted on CNN’s iReport site stayed up for 19 hours before CNN censors noticed it and ordered it deleted. By that time, it had racked up 17,000 shares and was starting to go viral. The author of that story contacted The Truth Barrier and explained how CNN content censors lied:

I wrote the CNN iReport. The producer contacted me and wanted to know how I know what I know. I gave her contact info for Hooker, and also for Thompson’s attorney. I took her through the entire Hooker/Thompson timeline of events. I told her what else is coming soon. The producer said she was calling Hooker right away and that if they verified the story they’d put it back up. Hooker said they never called. The story is still down.

The second story was removed far more quickly, lasting just two hours before it too was censored. The story “had garnered 20,000 views and 5,000 shares, before it was deleted,” reports TruthBarrier.com.

After a wave of public outrage at CNN’s obvious censorship of this historical story involving the medical abuse of black babies, CNN reluctantly restored the second story, which now has over 15,000 social media shares. But CNN added a note to the story, stating, “CNN has reached out to the CDC for comment and is working to confirm the claims in this iReport.”

What this means is that CNN will simply wait for a reply from the CDC which will obviously say, “These claims are false” for the simple reason that the CDC is the group which committed the criminal fraud in the first place! For CNN to ask the CDC whether it lied is like asking 100 prison inmates whether any of them are guilty.

Once the CDC responds to CNN with yet more lies, CNN will of course use that fabricated response to pull the story down yet again.

This is what happens when the mainstream media functions as nothing more than a band of Big Pharma media puppets. They ask no real questions; they investigate nothing that matters; and they trust the “official” word of the CDC even when it’s the CDC that has committed this outrageous act of scientific fraud that harms black children in the first place.

The fact that the CDC knew ten years ago that MMR vaccines caused a 340% increase in autism in young African-American babies is one of the biggest stories in medical history.

The fact that the CDC actively and knowingly committed scientific fraud to cover up this fact calls into question the entire credibility of both the CDC and the vaccine industry — both of which have been steeped in lies and criminality for decades.

The fact that CNN declared a site-wide media blackout on the CDC cover-up story is a true turning point in the history of media; a point where the corporate-run “mainstream media” publicly admits it has no interest in reporting anything other than corporate-sponsored lies and propaganda. This is the day when America learned that CNN will deliberately censor the biggest story in the history of “racist medicine” and “vaccine violence” by conspiring with the CDC and Big Pharma to pretend this story never happened.

CNN’s reputation is worse than merely in shambles over this cover-up… it has self destructed. There is no reason to ever trust CNN again on ANY story. Because it’s not just the stories CNN reports that you can’t trust… it’s the stories the network refuses to report that are even more important.

As CNN has demonstrated itself, it exists today as nothing more than a propaganda mouthpiece with a racist, eugenics agenda to harm as many black babies as possible while censoring all citizen journalists who attempt to report the truth about this crime against humanity.

By covering up this story, CNN is complicit in the genocidal agenda of the CDC which actively conspired to prevent the African-American community from learning the truth about MMR vaccines and autism. Today, CNN’s message to the world is essentially, “When black babies are being maimed and killed by bad medicine, we will actively suppress all reporting on the story, making sure even more black babies are destroyed in the name of vaccine profits.”

CNN founder Ted Turner, a very vocal fan of human depopulation, would be proud. What better way to accomplish the culling of human babies than to call it “immunization” and get everybody to line up and pay for it?

This petition is a demand for Pediatrics, the official journal of the American Academy of Pediatrics, to publicly issue a retraction of Drs. DeStefano, Bhasin, Thompson, Yeargin-Allsopp, and Boyle’s 2004 study entitled, “Age at first measles-mumps-rubella vaccination in children with autism and school-matched control subjects: a population-based study in metropolitan Atlanta.” 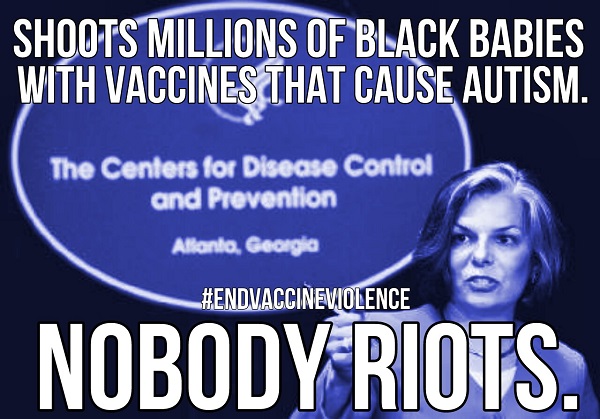