Earlier today an even more shocking recording has been “leaked” this time one between the always concerned about human rights EU foreign affairs chief Catherine Ashton and Estonian foreign minister Urmas Paet, in which it is revealed on tape that all those photos of horrifying deaths of Ukrainians by snipers during the last days of the Median stand off, were in fact caused not by Snipers controlled by Yanukovich, but that the snipers shot at both protesters and police in Kiev were allegedly hired by Maidan leaders! 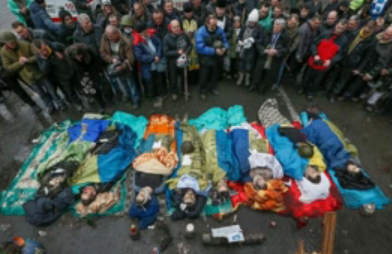 Here is the key exchange, just after 8 minutes into the conversation :

Paet: “All the evidence shows that people who were killed by snipers from both sides, policemen and people from the streets, that they were the same snipers killing people from both sides. … Some photos that showed it is the same handwriting, the same type of bullets, and it is really disturbing that now the new coalition they don’t want to investigate what exactly happened. So there is now stronger and stronger understanding that behind the snipers, it was not Yanukovych, but it was somebody from the new coalition.”

Ashton: “I think we do want to investigate. I mean, I didn’t pick that up, that’s interesting. Gosh.”

So first US orchestrates the Kiev overthrow, and now the new “leaders” of Ukraine are allegedly found to have fired against their own people – the same provocation they subsequently used to run Yanukovich out of the country and install a pro-Western puppet government. Of course, said pro-Western coalition has not been discreditated (sic) because Ms. Ashton has sternly refused to investigate, knowing quite well how horribly this would reflect on the new Ukraine “leadership” –  a government which shot its own people to fabricate the pretext under which it rose to power.

Is it any wonder then that Russia has responded the way it has?

As for at least one of the affected parties, Estonia, it has just confirmed the authenticity of the recording, and the ministry of foreign affairs has organized a press conference to answer media questions today at 5 pm. From the Valisministeerium:

Paet and Ashton conversation took place on 26 February, following Estonia’s Foreign Minister’s visit to Ukraine, and immediately after the end of the street violence.

Foreign Minister Paet communicate what he had said about the meetings held in Kiev last day and expressed concern about the situation.

“It is extremely regrettable that such an interception is occurring at all”“said Paet., Including its call for today’s photos are not random,” he added.

Yes, it is truly regrettable that the people know the truth.