– CONFIRMED AT LAST: The attempted cover-up of how JP Morgan torpedoed Lehman Brothers (The Slog, July 15, 2012):

As an early propagator of the allegation that JP Morgan Chase deliberately hastened the Lehman collapse, the Slog finds itself vindicated three years on by a successful regulator action against JPM, and contemporary documentation. 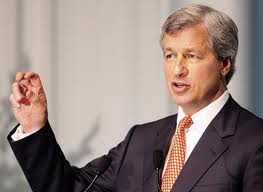 “And then when you have the suckers by the balls, you squeeze just like this”

Around the time of the Lehman disaster, a senior insider at the firm relayed to me what seemed an astonishing allegation: that in the weeks prior to the eventual collapse, JP Morgan deliberately withheld huge monies owed to Lehman in order to make the bankruptcy a certainty from which they could benefit. I relayed this story to another contact the following year, and he not only corroborated the charge, he also said he was sure Barclays had done the same. The now disgraced Barclays CEO Bob Diamond took over Lehman in a fire sale only weeks later (using taxpayers’ money as a bridging loan to do it) and rapidly built up a commanding position for the division he then headed up, Barcap  – the investment arm of the bank.

Now, more than three years later, regulators have penalised JPMorgan for actions tied to Lehman’s demise. The bank settled the Lehman matter and agreed to pay a fine of approximately $20 million. The action took place because of Morgan’s ‘questionable treatment of [Lehman] customer money’: regulators accused JPMorgan of withholding Lehman customer funds for nearly two weeks. So it had been true after all.

Jamie Dimon’s Morgan Chase dodged and dived on this one for three years in an attempt to smooth over the tracks.  As late as April this year, the Pirate insisted that the ‘monies involved were small’: but that doesn’t tally with this Wall Street Journal snippet from the time as follows:

‘Lehman Brothers Holdings Inc., the securities firm that filed the biggest bankruptcy in history yesterday, was advanced $138 billion this week by JPMorgan Chase & Co. to settle Lehman trades and keep financial markets stable, according to a court filing.’

Advancing cash to keep the markets stable is simply double-talk bollocks: many observers are sure this was the Lehman trades money withheld by JPM. The Lehman administrators continued to air their grievances about it, and in late May 2010 the bankruptcy estate of Lehman Brothers Holdings, Inc. filed suit against JPMorgan Chase, alleging that JPMorgan’s actions in the weeks preceding bankruptcy were wrongful. The claims arose from amendments and supplements to the Clearance Agreement between Lehman and JPMorgan in the weeks immediately preceding the bankruptcy. (In a nutshell, JPM changed the terms without notice to include onerous requirements for massive collateral against giving Lehman its own money back – a form of crooked logic that only a banker could construct. The weight of this collateral requirement on already serious debts took Lehman Brothers from intensive care to the Pearly Gates).

Just before this suit was filed, I took a small risk by including in a Slogpost of 13th March 2010 the phrase ‘former Lehman employees rendered jobless by management hubris and JP Morgan’. Now the full extent of the cannibalism indulged in by Morgan has come to light…although Barcap’s  role remains in a murky penumbra somewhere. But typically, by coughing up twenty million bucks to the Federal Government, the predatory Morgan Chase has got away with ‘not admitting guilt’. Disgraceful. Think of it this way: $20m to ice a major appointment…that has to be the bargain of the decade.

‘The top-ranking British law practice Linklaters signed off on controversial accounting practices that let Lehman Brothers shift billions of dollars of debt off its balance sheet. This masked the perilous state of the bank’s finances, and for many years misled both investors and regulators….Not only has crooked dealing been a clear and present carbuncle on the City’s reputation for decades, ancillary professional concerns have long been up to their necks in illegal collusion in such activities….Time and again, accusations of wrongdoing are met with appalled sanctimony by those routinely involved in serious misdeeds….only to result in even worse revelations…..And equally, the sentences handed out to miscreants justifiably evoke cries of ‘one law for the rich and another for the poor’.’

Well, nothing changes. And not much changed in Morgan the Pirate’s behaviour either: on 20th May 2009, so a CNBC story claimed, Washington Mutual (Wamu) sought billions in damages following its acquisition by Morgan Chase, via a class action suit littered with phrases like ‘far below market value’, ‘premeditated plan’, ‘designed to damage’, ‘purchase…on the cheap’, ‘wrongful conduct’, ‘sham negotiations’, ‘misusing confidential information’, ‘violation of confidentiality agreement’, ‘unfair advantage’, and ‘fire sale prices’. Nothing to see there, then. On June 24th last year, an Appeals Court revived the action – whch clearly has some merit. As far as I know, it continues to rumble on today, to the benefit of lawyers….just for a change.

Hat-tip to US Slogger Butch Cassidy for alerting me to progress on the original Lehman scam. If anyone has anything substantial on Diamond Bob’s role in it, the address as always is jawslog@gmail.com

Poscript: when I suggested in a 2007 edition of the magazine Market Leader that robust Lehman results hid an overdependence on merger and acquisition business, I did not for a second suspect wrongdoing – only myopia. But I can promise you, no editor has ever received such a level of vitriol from Lehmans and others in the sector – coupled with bullying threats of legal action, and accusations of dangerous naivety on my part. It must rank as one of luckiest unintentional scoops of all time.