As we pointed out about a month ago, in “While You Were Sleeping, Central Banks Flooded The World In Liquidity” as the world was focused on headlines whether or not the Fed would step up as it always does when the market is sliding, and unleash the monetary floodgates, it was not Ben Bernanke, but eveyrone else that hit CTRL+P and took the place of the Fed, of note the primary central banking peers among the Final Four – the ECB, the BOE and the BOJ. And why not: after all the hope was that since electronic money is electronic money, and can be moved from point A to point B at the push of a button, it would be used primarily to reflate stocks around the world, but mostly where the path has least resistance – the US. What was not accounted for was that money would also be used to inflate commodities such as oil – a key factor when delaying further US-based easing in an election year. However, more than even record for this time of year gas prices, there was one even more important outcome from this chain of events. As the following chart from Willem Buiter shows, in its fake attempt to show monetary restraint, the Fed has gone straight into last place in the “race to debase.” Needless to say, in a world with $25+trillion in “excess” debt (debt which would need to be eliminated simply to reduce global debt/GDP to a “sustainable” 180% per BCG), last is a very bad place to be… 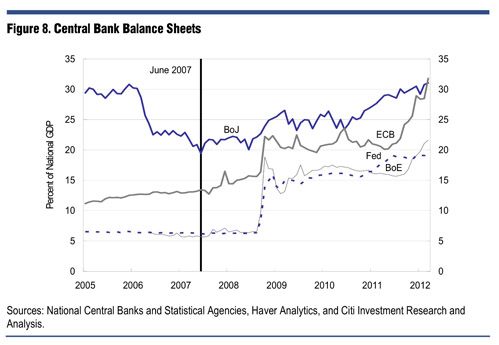 Of course, our frequent readers will note that this is the same chart that we have presented, however in the form of the main correlation chart for 2012 as we have dubbed it – i.e,  the ratio between the size of the ECB and the FED vs the EURUSD. What is probably also quite disturbing is that the Fed is “losing” even after expanding by a massive 232% in the past 5 years, a number that is only topped by the Bank of England. To quantify, the Fed is now responsible for “only” 20% or so of US GDP, compared to 30% for the ECB and BOJ. To further quantify, to get back to first place in the race to debase, the Fed will have to do at least another $1.5 trillion in QE.

Also, having become a buyer of last reserve for credit money, it is easy to see why one should be outright skeptical of US GDP “numbers” – from 6% of US GDP, the Fed now accounts for a whopping 19% – this is “growth” that would not have happened unless the Fed, via debt monetization would have allowed it. Said otherwise, net of Fed deleveraging (if it ever unwinds its balance sheet of course), US GDP would be a 13% lower!

Not only that but as the chart above shows, global GDP has about $6 trillion in “one-time, non-recurring” growth factored in.

… Only, and let’s not fool ourselves here, it is not one-time, and certainly not non-recurring.

As shown here before, the biggest problem for the world right now is the disappearance of “money good” assets, and the redirection of investing capital from worthwhile growth activities such as R&D into shareholder placating pursuits such as dividend issuance (and overall cash hoarding), and job dilution -a practice which as described yesterday may have well killed the virtuous cycle. As such any future global “growth” will be exclusively a function of further “nominal” improvements, achieved only through further currency dilution.

And now that the economy has once again hit a downward inflection point (with 12 of 14 economic indicators coming in negative), and since the Fed has some serious catching up to do to get back to the front of the race to debase, it is only a matter of time before it becomes clear that Obama reelection be damned, it is Bernanke’s turn to hit CTRL+P. Because in a world in which only currency devaluation matters, a 10% debt/GDP handicap is most certainly a nominal aggression that will not stand…

1 thought on “Federal Reserve Is Losing The ‘Race To Debase’”