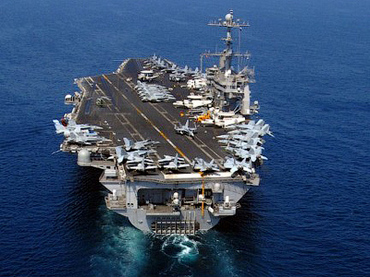 A handout picture from US Navy dated February 21, 2007, shows the Nimitz-class aircraft carrier USS John C. Stennis as it conducts operations in the Gulf (AFP Photo / US Navy / Ronald Reeves)

­It is not news anymore to say that the West will soon attack Iran, maybe Syria. They have been threatening to do that for years now, certainly ever since the failed Israeli invasion into Southern Lebanon in mid-2006, when they were routed by Hezbollah.

So what is different today? For starters, general circumstances have changed dramatically in the Region. Genuine popular dissent inside key Muslim countries has been used by the Western Allies to train, fund and arm local criminal and terrorist organizations, dubbed “freedom fighters”, as their proxies.

Country after country has fallen victim to the CIA’s, MI6’s and Mossad’s “dirty tricks departments”, and other Western-style terrorist organizations. Results range from moderate “regime change” in Tunisia and Algeria; via horrendous “violence by our boys” in Egypt, Yemen and Bahrain; all the way to outright military attack, civil war and political assassination. Such as the one in Libya, where Hillary Clinton boisterously laughed when she learned Muammar Gaddafi had been murdered live on TV by “her thugs”.

The whole region has been set on fire. Not that other regions of the world are not on fire too; however the pyrotechnics used by the Global Power Elite vary in nature in each geography. For example, Europe, the US and Britain are being set alight using financial terrorism resembling a neutron bomb, which kills people off while leaving assets and banks standing.

Now in Iran the stage seems set for a final show-down. It has taken so long only because Israeli, British and US planners are not stupid; they know that messing with Iran is not like messing with Iraq or Pakistan or Afghanistan or Libya. Messing with Iran will bring Western Allies very dangerously close to messing with Russia and China. If I were in their shoes, I would not do that. Unless…

Unless World War III is what they are looking for. Now, why would they do that?  Perhaps, because they have realized that there is just no peaceful way of achieving their dream of World Government. Perhaps because they have understood that the financial quicksand they have backed themselves into is so devastating that it cannot be cleaned up with purely financial, monetary and “legal” measures, in which case…

Nothing beats a good war! Perhaps, because wildcard Israel is so very much in control (or should I say, out of control) that they are imposing the “Sampson Option” not only on themselves, but also on their controlled Western Allies and the whole planet if need be. “After me, the Flood!”

Things in the Strait of Hormuz are extremely dangerous and volatile. After being systematically threatened with unilateral military attack, invasion, and even nuclear strikes, now the Iranians are showing their muscle too. On 24th December, Iran began a 10-day spate of military maneuvers in the strait that has all but put the US, UK and Israel on red alert. A US aircraft carrier force is now in the area and their helicopters have flown dangerously close to Iranian forces. Any spark could set off a conflagration.

Meanwhile, Syria is falling into meltdown. Meanwhile, Israel is preparing “Cast Lead II” over and inside Gaza. Meanwhile, Hezbollah is ready to strike Israel with tens of thousands of very deadly short-range “Katyushka” rockets.

A key sign of impending war is an article just published in the January/February 2012 issue of Foreign Affairs, the official journal of the New York-based Council on Foreign Relations (CFR). It carried the ominous title of Time to Attack Iran: Why a Strike Is the Least Bad Option, by Matthew Kroenig. This man was, until last July, special advisor to the Pentagon for “Defense Strategy on Iran” – Newspeak for “let’s beat the hell out of Iran”.

The CFR is the key Global Power Elite think-tank, founded in 1919 together with its London sister organization, the Royal Institute of International Affairs (also known as Chatham House). Its more than 4500 members are deeply embedded into the uppermost echelons of public and private power in the US, controlling banking, industry, media, academia, the military and government.

Key government posts are always controlled by one of their lot, irrespective of whether the Democrats or Republicans are in power. The CFR is integrated into an intricate network of similar organizations that includes the Trilateral Commission, Brookings Institution, American Enterprise Group, Project for a New American Century, Bilderberg and others. They all operate in streamlined coordination, consistency, synchronization and – most important – with a common purpose.

In his article, Mr Kroenig, assesses how “American pundits and policymakers have been debating whether the United States should attack Iran and attempt to eliminate its nuclear facilities,” concluding that, “The only thing worse than military action against Iran would be an Iran armed with nuclear weapons.”

He warns against “skeptics of military action (who) fail to appreciate the true danger that a nuclear-armed Iran would pose to US interests in the Middle East and beyond.”

This reflects Defense Secretary Leon Panetta’s recent remarks when addressing the Brookings Institution’s pro-Israel “Saban Forum” bringing together US and Israeli military strategists that repeated the usual Baby Bush “all options are on the table” threats.

Mr. Kroenig talks of the “dangers of deterrence” and gives the Obama Administration unequivocal advice: “The truth is that a military strike intended to destroy Iran’s nuclear program, if managed carefully, could spare the region and the world a very real threat and dramatically improve the long-term national security of the United States.”

As these pyromaniacs get ready to ignite the regional and global powder keg, one key question looms ever larger: what will Russia do?