Babies to be given diet drug in the womb to stop them being born overweight in trial described as ‘disturbing’ by weight loss groups. 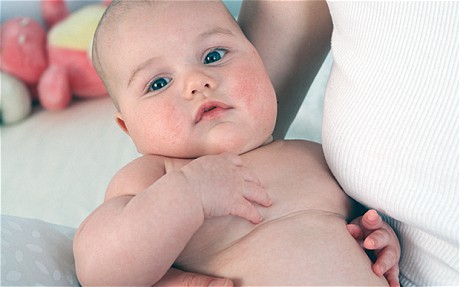 Doctors hope it will prevent the birth of oversized babies, thereby reducing the need for caesarean sections Photo: ALAMY

One hundred obese mums-to-be will be given Metformin as part of a three-year study to tackle obesity rates and reduce the number of difficult births.

Patients at Liverpool Women’s Hospital will be given the drug to reduce the food supply to their unborn babies, although it will not help the mums themselves to lose weight.

Leading the trial, senior lecturer in obstetrics, Dr Andrew Weeks, said: “It is about trying to improve outcomes in pregnancy for women who are overweight.

“The problem is babies tend to be larger and many of the downsides of being overweight during pregnancy relate to the birth.”

Metformin reduces blood sugar levels which are passed onto babies in the womb, and is already regularly used to treat diabetic mums-to-be, as well as diabetics in general.

During the study, half of the patients will take Metformin pills up to three times a day from 12 weeks gestation, while the other half will be given placebo drugs.

Doctors hope it will prevent the birth of oversized babies, thereby reducing the need for caesarean sections.

Instances of pre-eclampsia, the potentially fatal complication in pregnancy common to overweight mothers, are also hoped to be reduced.

The trial will run as a joint study between hospitals in Liverpool, Coventry and Edinburgh and will monitor over 400 women in total.

Dr Weeks added: “The difficulty comes when you have been living in a particular way for years that is not healthy.

“To suddenly change to a different lifestyle is not easy to do.

“Lifestyle change takes time and we would always encourage this as well but the use of Metformin gives us another option when the other is not realistic.”

However, a leading expert behind the UK’s fastest growing weight loss organisation has voiced concerns over giving pregnant women drugs to prevent them having obese babies.

“The fact that the widely-used diabetes pill, Metformin, is being trialled to prevent obese babies being born to overweight mothers is disturbing to me, and I am sure most other women as well.”

Will Williams, scientific advisor for All About Weight, added that, although there were “reasonable grounds” for the trial, it was “a shame that it is needed at all”.

He said: “We know Metformin is safe in pregnancy and has no negative effects on the child up to 2 years, but there is a lack of studies on older children.

“Women wanting to conceive could instead lose weight by following a healthy weight loss plan, including diet and exercise.

“This would achieve all the things that the Metformin trial is hoping to do, without the risks or costs of adding a drug with uncertain long term effects.

“This would be far preferable to popping a pill that may help pregnancy outcomes.

“It is unlikely to break the cycle of an unhealthy lifestyle leading to overweight children and the continuing rise of obesity and diabetes in the general population.”

However, Jane Norman, Professor of Maternal and Foetal Health at Edinburgh Royal Infirmary and the University of Edinburgh, believes the benefits of the trial will outweigh the risks.

Prof Norman, a representative of leading pregnancy charity Tommy’s, said: “Research has shown that babies born to obese mothers are at increased risk of complications in later life.

“Obese pregnant women have high levels of glucose and Metformin is proven to reduce glucose.

“We have to be careful with the use of drugs in pregnancy but we already know that it is safe to give expectant mothers.

“It is likely that Metformin will prevent babies from getting too big and, putting all these factors together, I am confident that the benefits will outweigh the risks.”

2 thoughts on “Absolute Madness: Babies Given Anti-Obesity Drugs In The Womb”