Milk and meat from the offspring of cloned animals should be allowed to go on sale, according to a government minister. 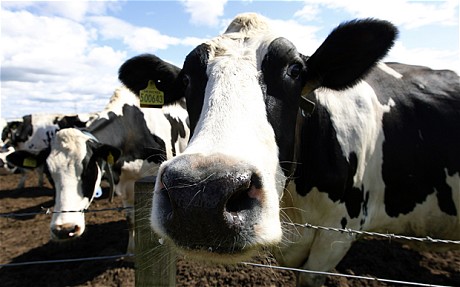 Animal welfare campaigners said they were dismayed at the statement from Jim Paice Photo: REUTERS

The comments are the clearest sign that the Government will give the official green light to farmers and food companies who want to supply butchers and supermarkets with the controversial products.

However, animal welfare campaigners said they were “utterly dismayed” by the ministerial statement, saying it opened the door to widespread cloning, with consumers unable to tell whether they were eating meat originating a cloned animal or not.

The statement was made by Jim Paice, the food and farming minister, in response to a written question from Zac Goldsmith, the Conservative MP.

Currently the Food Standards Agency believes that any food company attempting to sell food from not just a cloned animal – but crucially, also the offspring of a cloned animal – needs to apply for a so-called “novel food” licence.

Mr Paice pointed out that the Europe Commission interpreted the current food legislation differently from the FSA; the Commission believes the rules apply only to food from cloned animals themselves, not their offspring.

He added: “For the future, the Government shares the Commission’s view that there should be no restrictions on the use of offspring of cloned animals.”

This is the most direct comment that a minister has made on cloning since a row broke out last summer when it emerged that meat from the offspring of a cloned cow had been sold unwittingly in butchers’ shops without a licence being obtained. The discovery that such meat had entered the food chain triggered an ill-tempered debate into the ethics of cloning animals. Animal welfare campaigners have said that cloned animals suffer far more than standard animals.

Mr Paice’s comments suggested that the Government believed in future it would support any farmer selling milk or meat from a cloned animal and that there was no need for them to receive any licence.

His comments followed a statement from the Food Standards Agency at the end of last year, which said it could find no scientific evidence that there was any reason why cloned meat or milk could not be eaten safely.

An independent study commissioned by the FSA found that issues over allergies, toxins and possible side effects of eating cloned meat “did not highlight any issues of concern”. The FSA is in the final stages of a consultation about cloned food. Its final report will be presented to the Government in the next few weeks.

Emma Hockridge, head of policy at the Soil Association, the leading organic certification body, said: “It is unacceptable that the Government has come to this conclusion without adequate evidence. The impact of cloned foodstuffs on human health cannot at this point be adequately assessed on the basis of existing scientific data.

“At a time when Government is expressing a desire to move towards ‘honest labelling’ of food, so consumers understand what they are purchasing and know its provenance, cloned animals and their offspring should not be allowed to enter the food chain.”

Compassion in World Farming said it was “utterly dismayed” that the Government appeared to be championing cloned food. Peter Stevenson, the chief policy adviser to the charity, said: “”We don’t want any cloned meat, or meat from the offspring of cloned animals. There is clear evidence that it causes suffering.

“At the very least there should be a clear labelling regime, allowing consumers to chose.”

A report from New Zealand this week suggested just one in ten cloned animals survived into adulthood.

Agricultural specialists, have always pointed out that cloning was no more than a natural extension of many long-established farming techniques such as embryo splitting and artificial insemination.

The farmer, at the centre of last year’s furore, said he was cheered by the ministerial statement. He owns 90 heifers, which are the second-generation offspring of a cloned cow. They are one-and-a-half years old and not yet ready to produce milk, but he said he wanted to be able to sell that milk when the time came.

Steven Innes, the farmer, said: “It’ll be normal milk, no different from any other. We would much rather keep the heifers and sell the milk, instead of selling the heffers to Europe.

“We’ll get a good price for them in Europe, but realistically, the milk will end up being exported back to Britain in the form of cheese or ready meals and British consumers will be eating in one way or other.”