Genetically modified (GM) crops that have not been approved in Europe could be allowed into the British food chain for the first time after a vote in Brussels decided to let in contaminated shipments of animal feed. 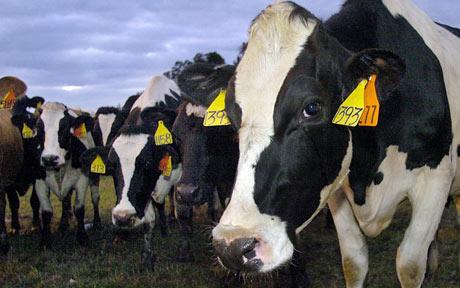 Unauthorised GM could end up in animal feed in Britain. Photo: EPA

Previously the EU had a ‘zero tolerance’ policy to unauthorised GM. Shipments found to contain any trace of GM that was not yet approved in Europe were turned back at the port.

However in a significant victory for the GM lobby member states voted to allow imports containing up to 0.1 per cent of unauthorised seed.

If the vote is allowed through by the European Parliament and Council, which is likely, those shipments could contain GM seeds that are authorised in a “third country” but may not even have been tested in Europe.

Dr Helen Wallace of Genewatch said some of the unauthorised seeds have been bred to have certain traits for industry that may be inappropriate in the food chain.

“We think it is a major concern because it is a foot in the door to allow unauthorised products into the food chain,” she said. “That could include crops modified to produce industrial chemicals or pharmaceuticals or for biofuels.”

A Daily Telegraph investigation found that every supermarket in the UK stocks dairy and meat products from animals fed GM soy.

But Mute Schimpf, Friends of the Earth Europe food campaigner, said most shipments are clean of unauthorised GM and there is no threat to food security from zero tolerance.Only 0.2 per cent of all EU soya imports have ever been turned back because of contamination and these all came from the US.

She said the vote was a result of lobbying by the biotechnology industry and the US to try and force Europe to accept more GM and puts food safety in danger.

“There is absolutely no reason to allow contaminated food to be fed to animals in Europe. Weakening safety rules to appease the animal feed industry compromises human and environmental safety,” she said. “It is disappointing that a number of member states preferred to listen to the scare-mongering from industry rather than the concerns and wishes of their citizens,” she said.

The vote comes as new figures reveal that almost 150 million hectares of land was planted with GM crops last year, 10 per cent more than last year.

Most GM is soy, cotton, oilseed rape and maize designed to be herbicide or insect resistant but other plants are being developed for commercial used including tomatoes, broccoli and bananas.

The annual industry report found 29 countries are now growing GM, up from 25 last year after Pakistan, Burma and Sweden planted crops fo the first time and Germany resumed planting of GM. The US is still the biggest grower of GM, while Brazil is second and the fastest growing sector.

The International Service for the Acquisition of Agri-Biotech Applications (ISAAA), that represents the biotech industry, said developing countries grew 48 percent of the total crop of GM, covering 10 per cent of arable land.

“Biotech crops have helped reduce carbon emissions and save land, while helping alleviate poverty and for some of the poorest people in the world,” he said.

However Pete Riley of GM Freeze said most GM is on massive commercial farms in South and North America.

He pointed out that far less GM is being grown in Europe and Asia, where opposition remains strong.

“Opposition to GM crops remains strong across the world and people and farmers are increasingly questioning why governments are allowing the seed industry to become dominated by a handful of companies that use intellectual property laws to claim monopoly rights and to deny farmers and other plant breeders full access the world’s plant genetic resources for future plant breeding. Common sense says that this makes no senses in a world where millions are starving or undernourished”.