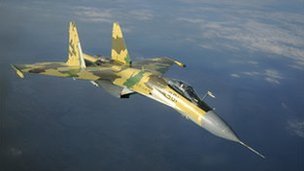 One hundred warships are also due to be bought in, including two helicopter carriers, in addition to two already being purchased from France.

The submarines will carry the Bulava missile, despite recent test failures.

Analysts say the ambitious programme only makes sense if the military upgrades its training and recruitment.

A painful drive to streamline the armed forces is already under way, with up to 200,000 officers losing their jobs and nine out of every 10 army units disbanded, the Associated Press news agency notes.

If the renewal is a success, it will leave Russia less reliant on the nuclear arsenal it inherited from the USSR.

“This spending necessitates a whole new kind of military.”

Missile defence boostLast week, Russian Finance Minister Alexei Kudrin announced that spending on defence development would triple from 0.5% of GDP to 1.5% from next year.

The defence spending was detailed in Moscow on Thursday by First Deputy Defence Minister Vladimir Popovkin.

“The main task is the modernisation of our armed forces,” he said.

Much of the new spending will go on Russia’s long under-funded navy. Apart from the submarines, 35 corvettes and 15 frigates will be ordered.

Ten divisions equipped with the new S-500 anti-missile system are set to become the backbone of the country’s missile defences.