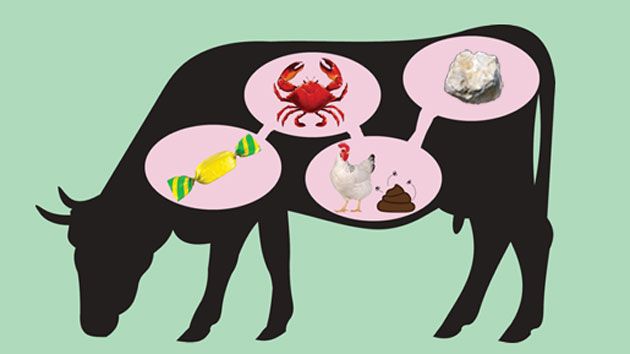 In addition to the old standbys of corn, soy, hay (and, uh, drugs), “there’s a lot of stuff which the general public might not think of as feeds which are actually quite common,” says Cory Parsons, a livestock nutrition expert at Oregon State University.

FUKUSHIMA — Two months after a government ban on beef was lifted, cattle farmers here are growing increasingly desperate as nearby vegetable farmers have halted production due to the ongoing nuclear disaster, leaving nowhere to take the accumulating manure that was previously used as fertilizer.

“When vegetable farmers are pushed into a dead end, there’s a domino effect that puts us into dire straits, too,” says 51-year-old Kazunori Mizunoya, a cattle farmer raising some 600 cows in Nakajima, a village located 70 kilometers from the troubled nuclear power station.

Not only is the fertilizer shed overflowing with manure, the cows in the barn stand in their own excrement nearly 70 centimeters deep. They sometimes shake their massive bodies as if they’re trying to wiggle free.

Cows like to be clean, and suffer high stress levels and illness when kept in unhygienic conditions. Indeed, almost half the cows in Mizunoya’s barn are experiencing deteriorating health.

Read moreFukushima Cows Stand 70 Centimeters Deep In Their Own Excrement

– 4,000 Potentially Radioactive Cows Without Radioactive Rice Hay May Have Been Shipped from One Farm in Namie-Machi, Fukushima (EX-SKF, Aug 20, 2011):

Radioactive beef from Fukushima meat cows (then Miyagi, then Iwate, then…) was first in the news in early July. Then, the culprit was very quickly identified as radioactive rice hay that was stored outside when Fukushima I Nuke Plant started to spew out radioactive materials.

First they said the rice hay was fed to the cows because there was nothing else to feed due to supply disruption after the March 11 earthquake. Then it turned out that rice hay was integral part of fattening the meat cows before they were sold to the market.

Then the news broke on August 19 that some meat cows from Fukushima were highly radioactive even without radioactive rice hay.

And then it turns out that 4,000 such cows may have been shipped from one cattle farm in Namie-machi alone since the accident. The radiation level on the farm is high, as you can read in the Kahoku Shinpo article below.

Well, that instantly doubles the number of meat cows potentially contaminated with radioactive cesium. I say potentially, because most of the meat has been consumed already and there’s no way to test it.

Regarding the 4 meat cows from a cattle farm in Namie-machi in Fukushima Prefecture that exceeded the provisional safety limit for radioactive cesium (500 becquerels/kg), the Fukushima prefectural government disclosed on August 5 that the meat from 5 additional cows from the same farm contained radioactive cesium exceeding the provisional safety limit. From this farm in Namie-machi, total 229 cows including the 9 that were contaminated were shipped to Yokohama City between March 15 and April 19.

Shimane Prefecture, in Chugoku region, announced that a high level of radioactive cesium has been detected from manure from the cows purchased from Fukushima Prefecture in May and June.

They were not fed with radioactive rice hey.

Some people in Japan suspected from the beginning when the meat cows from Fukushima were found with radioactive cesium that it was not just from the feed but from air and water. They were dismissed by the government officials who insisted the problem was just the radioactive rice hay.

Shimane Prefecture announced on August 19 that radioactive cesium was detected at two cattle farms out of 15 that had purchased meat cows from Fukushima Prefecture in May and June. At one of the farms, the level exceeded the provisional safety limit (400 becquerels/kg). The Ministry of Agriculture, Forestry and Fisheries had issued a notice earlier to Shimane Prefecture that it was free to move and ship meat cows, based on the survey results from Fukushima Prefecture.

Read moreHigh Level Radioactive Cesium In Manure From Radioactive Fukushima Cows, Pigs That Have Been Sold To Farmers All Over Japan

The government ordered a complete ban Thursday on all shipments of beef cattle from Miyagi Prefecture after detecting radioactive cesium above the government limit in some local cattle.

The government is also considering placing a similar ban on beef cattle from Iwate Prefecture, where five cattle from Ichinoseki and Fujisawa have already been found contaminated with radioactive cesium exceeding the limit of 500 becquerels per kilogram.

That decision is expected to come next week, sources said.

The Tochigi prefectural government announced the number on July 25. 106,000 becquerels/kg of cesium in the hay is the highest level so far found outside Fukushima Prefecture. If reconstituted, it would be 24,246 becquerels/kg. The safety limit for the cattle feed is 300 becquerels/kg.

The rice hay was collected in a dairy farm in Nasu Shiobara (more than 100 kilometers southwest of Fukushima I Nuke Plant) and sold to the cattle farm in the same City. Something doesn’t quite add up to the story of the both sides, though. According to Asahi Shinbun (7/24/2011):

He then sold the rolled rice hay to the cattle farmer via his acquaintance, by saying “it cannot be used as feed”. “I never imagined the hay would be fed to the cows.”

“I was never told that the hay was rolled on March 20. If I had known, I wouldn’t have bought it.”

–This Is Outrageous: Japanese Government Killing Its Own People In Fukushima (Video)

“Japan has no centralized system to check for radiation contamination of food, leaving local authorities and farmers conducting voluntary tests. Products including spinach, mushrooms, bamboo shoots, tea, milk, plums and fish have been found contaminated with cesium and iodine as far as 360 kilometers from Dai-Ichi.

Hay contaminated with as much as 690,000 becquerels a kilogram, compared with a government safety standard of 300 becquerels, has been fed to cattle. “

Radiation fallout from the wrecked Fukushima nuclear plant poses a growing threat to Japan’s food chain as unsafe levels of cesium found in beef on supermarket shelves were also detected in more vegetables and the ocean.

More than 2,600 cattle have been contaminated, Kyodo News reported July 23, after the Miyagi local government said 1,183 cattle at 58 farms were fed hay containing radioactive cesium before being shipped to meat markets.

Read moreJapan Is Only Conducting VOLUNTARY TESTING As Threat to Japanese Food Chain Multiplies, Cesium And Iodine Contamination Found In Milk, Vegetables As Far As 360 Km From Fukushima Nuke Plant

The number was 1,697 yesterday, and to that, 944 cows from Miyagi Prefecture alone were added overnight, bringing the total to at least 2,641.

Miyagi Prefecture announced on July 23 that additional 944 meat cows from Miyagi Prefecture suspected of being fed with rice hay collected after the Fukushima I Nuke Plant accident had been shipped to 6 prefectures – Tokyo, Yamagata, Miyagi, Kanagawa, Chiba and Niigata. The total number of potentially contaminated cows shipped from Miyagi is now 1,183.

That can still happen, but it is the radioactive beef from the cows that ate radioactive rice hay that have brought radiation everywhere in Japan.

Read moreThus Spread Radiation All Over Japan – Through Contaminated Cows

In response to the radioactive rice hay that’s been fed to the meat cows, the council that manages the Yonezawa-gyu (cow) brand in Yamagata Prefecture has decided to halt the auction for the remainder of this month and stop the shipment of cows voluntarily. This voluntary halt of shipment is spreading in the beef producing areas outside Fukushima Prefecture.

Matsusaka-gyu in Mie Prefecture has been detected with radioactive cesium, though well below the provisional safety limit of 500 becquerels/kg, which by the way allows for the radiation from radioactive cesium up to 5 millisieverts per year.

Last to be affected by this radioactive beef/hay scandal: Kobe-gyu anyone?