– 119 of 132 people positive from sampling survey of radioactive substances in urine in Iwate (Fukushima Diary, May 1, 2012):

Read moreRadioactive Japan: 119 Of 132 People In Iwate Test Positive For Radioactivity In Urine

This is the copy of the printed version of Fukushima Minpo on April 25, 2012, a local newspaper in Fukushima:

The reporter signs off as “Kyodo News”, but reading the postscript part of the article it is clear that this is the original Fukushima Minpo article. It was probably fed to Kyodo News, as Fukushima Minpo is a member of Kyodo News. 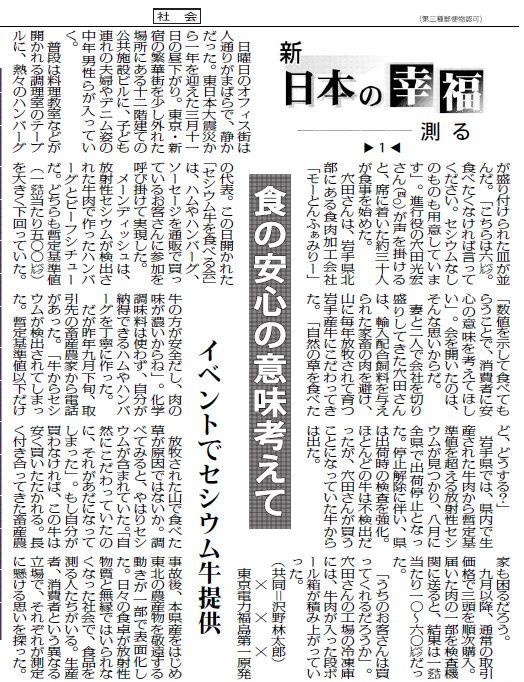 What does it say?

The series title in the upper right corner: “New Happiness in Japan – Measure”

The article title in the middle: “Think what “food safety” means”

The subtitle of the article: “Cesium beef offered at an event”

From this information, if you conjure up the image of the gist of the article as “OK, the happiness in Japan in post-Fukushima is to gladly eat beef known to contain radioactive cesium to help producers as long as it is measured and disclosed properly, and that’s food safety”, I’ll give you an A.

It was quiet in the office district on Sunday. It was March 11 afternoon, one year anniversary of the disaster. Couples with children, middle-aged men in jeans were entering a 12-story public building off the busy streets in Shinjuku, Tokyo.

On the tables in the kitchen that is used for cooking classes were the plates with hamburgers just cooked. Mitsuhiro Anada (age 40) told the people in the kitchen, “These contain 6 becquerels/kg [of radioactive cesium]. Please let me know if you don’t want to eat them. We have also prepared cesium-free ones.” About 30 people then sat at the table and started to eat.

Mr. Anada is the head of “Mo-ton Family”, a meat processing company located in the northern Iwate. The event, “Let’s eat cesium beef” came about after calling the customers who buy ham, hamburger meat and sausages from his company by mail order.

“I wanted the consumers to think about what “food safety” means, by showing the number [of radioactive cesium measurement] and having them eat [the meat]“, said Anada when asked why he held this event.

The government ordered a complete ban Thursday on all shipments of beef cattle from Miyagi Prefecture after detecting radioactive cesium above the government limit in some local cattle.

The government is also considering placing a similar ban on beef cattle from Iwate Prefecture, where five cattle from Ichinoseki and Fujisawa have already been found contaminated with radioactive cesium exceeding the limit of 500 becquerels per kilogram.

That decision is expected to come next week, sources said.