Cancer is also caused by parasites. Hyperthermia is (a small) part of many successful therapies to treat cancer and other diseases, like Lyme disease.

Once you remove the parasites from the body,  it sends the (immortal!) cancer cells into apoptosis and the cancer is gone.

Chemotherapy and radiation are the worst therapies I can think of  if you want to heal cancer.

Usually after a ‘successful‘ chemotherapy treatment the ‘cured’ cancer comes back violently within months or years.

The parasites  never left, they just went into hiding.

Chemotherapy destroys the immune system that was fighting those parasites and turns the body into a acidic paradise for parasites and cancer.

The second round of chemotherapy will not ‘work’ anymore and the Big Pharma concentration camp patients die, earning millions for the medical industrial complex.  Mission accomplished!

Cancer can be cured, but not with standard western gulag medicine. 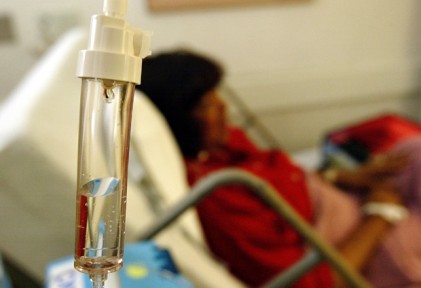 Heat – whether from a carefully created and controlled fever or from hyperthermia delivered by microwaves, radio frequency or ultrasound – is increasingly being used as a cancer treatment.

There are two theories as to why this might work. First, a fever within the body produces a state in which the immune system becomes hypersensitive, detects that the cancer cells are not normal and attacks them. It may be that, if we have a strong immune system, it is destroying cancer cells every day but, on occasion, some cells are missed and cancer develops. In the USA scientists are experimenting with giving cervical cancer patients a bio-engineered form of listeria (not the actual disease) – both it and salmonella are instantly recognisable by the body as enemy bacteria – thus hoping to spark the immune system into rising up to fight it and the cancer.

The second theory, which ties in with several stories recently about patients whose cancers have simply disappeared overnight, is that it is the high temperature itself which destroys the cancer. Also in the USA, cancer patients are being placed in an infra-red “hot box” for eight hours – under sedation – two days after chemotherapy and having taken immune system boosting drugs. This treatment is much gentler than radiotherapy, means less chemotherapy is required and, therefore, the patient will have fewer side-effects. It appears that primary malignant tumours have a bad blood circulation, which makes them more sensitive to changes in temperature. So, the experimental theory is that a 40 degree centigrade controlled fever will wake-up the immune system.

Hyperthermia tends to be used in combination with radio or chemotherapy but at a private clinic in Mexico – called the Hope4Cancer Institute – the doctors are using it as an “aggressive but natural approach to treatment” without the conventional therapies. The Medical Director is Dr Antonio Jiminez, who is an oncology researcher and determined to find non-invasive, non-surgical and painless treatments without side-effects. He explains that hyperthermia, using specific sound wave frequencies to heat the cancer cells and destroy them does not affect normal cells – so there are no side effects.

Dr Jiminez says: “We address all aspects of the cancer – spiritual, emotional and physical. We address the cause of the cancer and help the immune system fight the disease.” The institute employs six medical doctors with varying specialities, treats 200 patients each year and claims to be particularly successful with cases of breast cancer. His argument is that “cancer mutates, like flu mutates but our conventional cancer treatments are much the same today as they were 25 years ago.  We make new flu vaccines every year but we don’t change our approach to cancer.”

Ancient civilisations used heat to treat tumours – particularly those of the breast – and it seems that, once again, we are looking back to the less invasive treatments of the past. The spotlight seems to fall onto the role of the immune system and, as I wrote last week, the need to tailor treatment to the individual patient.

Could it be that the ever-growing number of people developing cancer are doing so because, nowadays, we have fewer infections and, therefore, fewer fevers? Does this mean that the immunisation programme, antibiotics and better hygiene have created the cancer monster?

1 thought on “How Hyperthermia Helps in Cancer Treatment”