Police and protesters clashed in Naples over plans to build a new rubbish dump on the slopes of Mt Vesuvius. 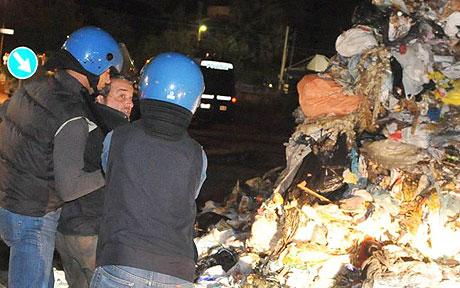 Italian policemen remove a protester from the road leading to a landfill in Terzigno Photo: EPA

Around 2,000 stone-throwing locals set fire to rubbish trucks and waste compactor machines into the early hours of Friday.

At least one protester was arrested and a senior police officer had to have stitches after being hit in the face by a rock, in the third consecutive night of violence.

Using tear gas and batons, police cleared a path through the demonstrators so that the rubbish trucks could reach the dump in the town of Terzigno, south of Naples.

Locals are bitterly opposed to the use of an existing waste site on the outskirts of the city and the plans to build a new one.

The clashes coincided with a strike by refuse collectors who fear that their temporary contracts will not be renewed.

The crisis has resulted in an estimated 750 tonnes of stinking, uncollected rubbish mounting up in the streets of the port city in southern Italy.

Naples hit the headlines in 2007 after tens of thousands tonnes of festering rubbish accumulated in the city’s streets.

One of Mr Berlusconi’s first actions on being re-elected in May 2008 was to resolve the crisis, but critics say his government failed to solve the underlying issues of a lack of incinerators and the local mafia’s control of waste disposal.

The head of Italy’s civil protection agency, Guido Bertolaso, who helped resolve the issue two years ago, said there was “something odd” in the fact that the city was again experiencing problems, implying that the local Camorra mafia was involved.