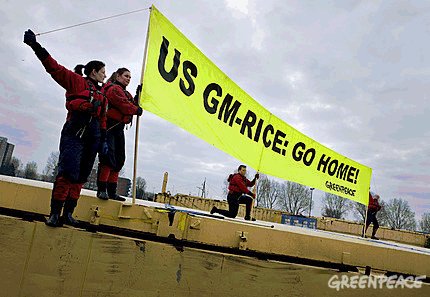 Greenpeace activists protest on a barge containing contaminated illegal GM rice shipped from the US in the harbour of Rotterdam.

The people don’t want GM food and protest all around the world against it.

And this is the result?:

GM food has to be stopped NOW:

What more can the people do to make their voices heard?

ST. LOUIS (CN) – A federal jury awarded a rice farmer $500,000 for his claim that genetically modified rice contaminated his crop. It was the third of five “bellwether” trials involving hundreds of lawsuits that farmers have filed against Bayer CropScience.

The complaints are the result of an August 2006 announcement that LibertyLink, a herbicide-resistant rice, had somehow been released from testing facilities. The rice had not yet been approved for sale for human consumption, causing rice futures to plunge.

The rice has been approved, but is not being commercially marketed.

Denny Deshotels claimed that he and his family lost more than $1 million when the market dropped, and he incurred more costs by switching crops and cleaning his equipment of the LibertyLink rice. He sought $1.5 million in damages.

Bayer lawyers admitted that Deshotels lost some money, but denied he lost as much as he claimed. Bayer’s attorneys argued that even though the rice market initially plunged, it quickly recovered and farmers who held their rice until the market recovered suffered few losses.

The five bellwether federal trials were initially set up to allow one case apiece in Missouri, Arkansas, Louisiana, Mississippi and Texas.

The outcomes were to give plaintiffs and defendants an idea about similar pending cases, giving them opportunities to work out settlements. Two of the cases have been consolidated.

Deshotels’ attorney, Don Downing, told the St. Louis Post-Dispatch that jurors in two state trials in Arkansas also have ruled in favor of the farmers.