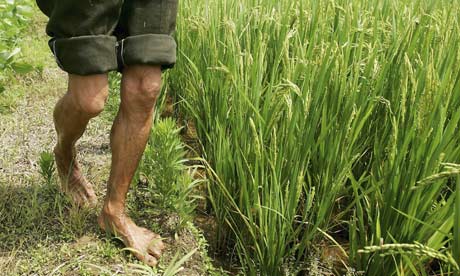 A Chinese rice farmer in the Hunan province of China. (Getty Images)

China’s state grain reserves have been contaminated by illegal, genetically modified rice, according to an investigation by Greenpeace.

The environmental group says it has found tainted samples at two rice processing enterprises that source their products from the strategic food reserve.

It is feared the transgenic products, which have not been approved as safe for public consumption, will spread nationwide because the reserves sell food and distribute emergency supplies during floods, droughts and other disasters.

The affected rice is believed to have originated in Hubei province – a centre of grain production and the site of field tests for strains containing the Bt63 gene, which repels insects.

Earlier this year, Greenpeace activists said they had found batches of genetically modified rice seeds in Hubei and its neighbouring province, Hunan.

They also found illegal GM rice on sale at Wal-Mart and Zhongbai supermarkets.

While several provinces have screened rice supplies for illegal transgenic products, Hubei has been slow to do so.

The group called on the authorities to tighten inspections to staunch the spread of tainted rice.

“The ministry of agriculture have stated many times that China does not permit commercial farming or processing of transgenic rice,” said Luo Yuannan, a food campaigner for Greenpeace. “Yet, obviously, Hubei hasn’t taken effective measures to block the contamination of paddy fields by illegal transgenic rice.”

The national grain reserve and the two processing companies were not available for comment.

China is in a quandary about whether to adopt genetically modified strains of its staple crop. While it is desperate to boost productivity to feed a fast-growing, urbanising population, it also fears the unknown health and biodiversity consequences of adopting transgenic rice on a nationwide scale.

Some environmental activists suspect scientists and biotechnology companies may be deliberating spreading genetically modified rice into seed supplies, paddy fields and supermarkets so they can declare de facto approval of the products.