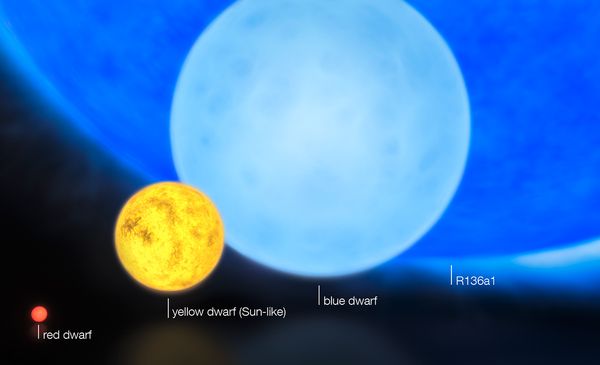 The most massive star ever found looms behind other young star types in an artist’s impression.

A newfound star has shattered the record as the most massive stellar monster ever seen, astronomers announced today.

Weighing in at a whopping 265 times the mass of our sun, the behemoth may have actually slimmed down since birth, when it likely tipped the scales at 320 times the sun’s mass.

The discovery could rewrite the laws of stellar physics, since it’s long been thought that stars beyond a certain mass would be too unstable to survive.

“We are really taken aback, because up until now the astronomical community at large has assumed that the upper size limit for stars would be around 150” times the mass of the sun, said study co-author Richard Parker, an astronomer at the University of Sheffield in the U.K.

“This giant could really revolutionize the way we think about how stars form and die in clusters and galaxies.”

Most Massive Star to Blow Itself Apart?

Parker’s team found the stellar monster in images taken with the European Southern Observatory‘s Very Large Telescope in Chile. The star is tucked inside a dense cluster of other hot, young, massive stars in one of the Milky Way’s satellite galaxies, the Large Magellanic Cloud.

“Because there are so very few places where there is enough gas that can collect and form such massive stars, we may very well be seeing the limit of how large a star can get,” Parker added.

The most massive stars are generally thought to die in huge explosions that scatter the stars’ outer layers but leave behind dense cores-either neutron stars or black holes.

“This fast-burning stellar giant, however, may be large enough to actually completely blow itself apart in a titanic explosion without leaving behind any corpse whatsoever,” the trademark of a pair-instability explosion, Parker said.

“We are fortunate to have caught sight of it when we did.”

The supermassive star is described in a paper in the July issue of the Monthly Notices of the Royal Astronomical Society.

1 thought on “Most Massive Star Ever Discovered, 265 Times The Sun’s Mass”